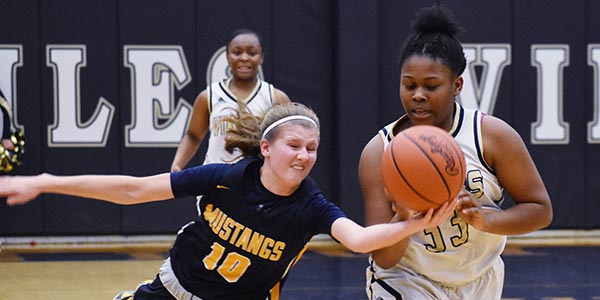 Accolades continue to roll in for Vikings

NILES — The accolades continue to roll in for the Niles girls basketball.

Patters, who became Niles’ all-time leading scorer with 1,216 points, was a first-team SMAC All-West Division selection, as well as an honorable mention pick by the Associated Press.

“Alycia has had a great academic and basketball career at Niles,” said Niles coach Jessica Johnson. “She has proven to be a dynamic scorer, a great teammate and an elite student-athlete. Alycia continues to impress us all with her accomplishments. She has definitely left a lasting legacy in our basketball program. I can’t wait to see what she does at the next level.”

Senior Reese Davies was named an Outstanding Senior Student-Athlete by BCAM. To earn that honor, Davies had to have a GPA of more than 3.8. She is a three-time Scholar-Athlete Award winner. She earned honorable mention status in the SMAC West Division.

“Though Reese didn’t hit her goals in regards to stats this season, she always came up big when her team needed her the most,” Johnson said. “I was elated to see her recognized for her hard work on and off the court by receiving acknowledgments from the SMAC and BCAM.”

“The BCAM Team First Award recognizes Morgan for her teamwork, commitment, service, and sacrifice on the behalf of her team, teammates and school,” Johnson said. “Any time the team put their heads down, Morgan was there to help lift them up. Morgan’s positivity is infectious. We could always depend on Morgan to motivate our team and get them back on track when needed.”

Sophomore Amara Palmer won her second Scholar-Athlete Award. She led southwest Michigan in assists and was one of the top scorers in the area. She was a first-team SMAC All-West Division selection.

“Amara was forced to get comfortable with the ball in her hands this year, which allowed teammates to get easy buckets,” Johnson said. “Amara is an unselfish player who is always looking to get her teammates involved. Next year, we will need her to generate her own scoring while still playing a high-IQ game.”

DOWAGIAC — The winter sports season may have been shortened, but that did not keep the Dowagiac sports teams from... read more