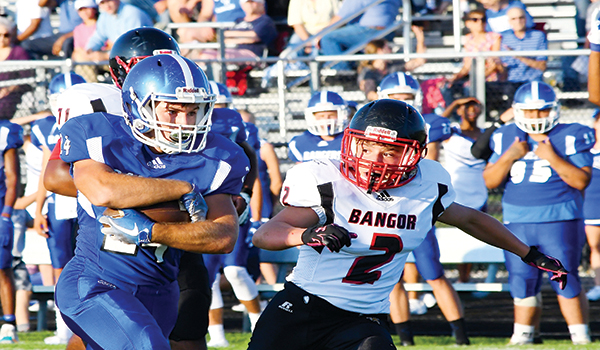 Cassopolis’ Owen Gardner is in the spotlight this week. (Leader file photo)

Owen Gardner is a senior on the Cassopolis boys track team.

What has been one of your greatest accomplishments as an athlete?

OG: My greatest accomplishment would be the opportunity to compete in both football and track at the collegiate level this upcoming year. A close second would be running at state in track my sophomore year, and making it to semi-state in football my junior year.

OG: My biggest disappointment would have to be in my junior year when I re-injured my hamstring at regionals during the track season. I was the top seeded runner in the 100-meters and the 200-meters, so it was disappointing not being able to compete.

OG: I have many heroes in my life. Most of them are my family members, but my two biggest heroes are my mom and my dad. They instilled a work ethic in me that I believe is matched by none, and I learned that by watching how they work and go about their life. Also, my grandparents and my brother, who I know are my biggest fans.

OG: I always try to stay calm during competition, but there are always those pre-game or pre-race jitters, but I always just remind myself that I have worked hard enough to be confident, so I try to stay calm.

OG: An embarrassing athletic moment would have to be when I dropped the baton in a relay during my sophomore year in track.

OG: When I workout/train by myself, I always train as hard as I can. If you workout at half speed or without effort, then you are creating bad habits and will make little to no progress. It always goes back to the old saying, “How you practice is how you play.”

What other sport would you like to compete in if you were not playing yours?

OG: Another sport I would compete in is basketball. I’m not very good at basketball, but love watching and playing it.

Why are sports an important part of a high school experience?

OG: Sports allow you to create a bond with your teammates that you cannot create anywhere else. Going out and playing for your brothers on the field is one of the best feelings.

OG: I would choose the Chicago Bears, but I would want to be the general manager, because we need a quarterback not named Mitchell Trubisky or Nick Foles.

OG:  This is a tough one. Sports have consumed such a large part of my life, so it would be hard not to play. If I weren’t playing sports during high school, then I would have gotten a job and joined more clubs.

OG: The most challenging thing for me to do would be pass-blocking. As an undersized running back, sometimes it is hard to pick up extra linebackers or unblocked lineman.

OG: One rule I would change would be in the NFL, the overtime rule. I would change it to be like college, where it’s more like a shootout, with each team having the opportunity to score.

OG: The best compliment I have ever received is that I am a hard worker.

OG: The scariest thing I have had to do was change schools at the beginning of my junior year. I am very glad I did it. It has provided me a great set of friends and an opportunity to play multiple sports in college.

OG: The way that my school system came together to support the students during this pandemic.

OG: Working out and studying my sports is my favorite hobby. There is no better feeling than seeing the growth you are making as an athlete.