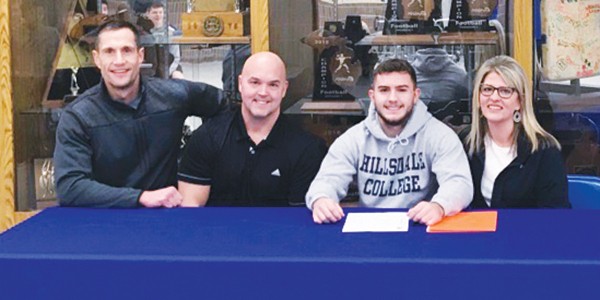 CASSOPOLIS — Senior Owen Gardner, of Cassopolis, will continue his academic and athletic career at Hillsdale College.

Gardner, a football and track standout for the Rangers, will compete in both sports for the Chargers.

That was one of the top reasons he picked the school to sign his national letter of intent with.

“It is a great academic opportunity,” he said Friday morning, “as well as running track and playing football there. I love the coaches. The facilities are great too.”

Hillsdale was nearly the primary focus of Gardner in his college search, although he did consider Butler University in Indianapolis for a time.

Gardner said he was looking for a school that would let him compete on both sports, as well as the right fit academically.

“If I were only able to play football, I would have been fine with that,” he said.

He is currently undecided about his major.

Like the rest of Michigan, Gardner is waiting to see if sports will return this spring after they were suspended due to the COVID-19 outbreak. He has been working out at home for both sports, but says track is much easier to do on your own.

“I have been doing a lot of stuff like getting out on my road and running and pushing my truck,” he said. “I have been lifting weights to stay ready.”

Gardner has also contacted teammates to see how they are doing.

“They are kind of upset that the track season has been suspended, but I think they are all staying in shape just in case we come back. Our relay team was looking good for a run at state.”