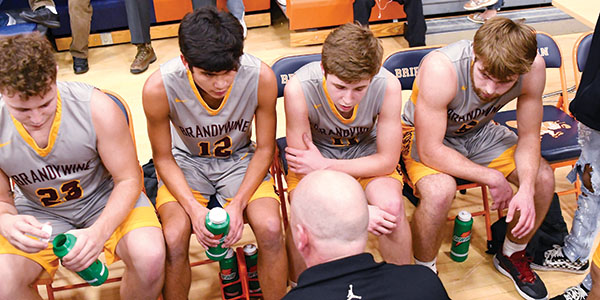 The Brandywine boys basketball team was one step away from another district title when the tournament was suspended. (Leader photos/SCOTT NOVAK)

DOWAGIAC — For Dowagiac, Cassopolis, Brandywine and Buchanan, the news on Thursday that the Michigan High School Athletic Association had suspended the winter sports tournaments was devastating.

Although there was a glimmer of hope that perhaps the tournaments could resume after a week or so, that hope ended when Michigan Gov. Gretchen Whitmer announced that all schools would be closed through April 5.

For the four boys basketball teams that were scheduled to play for district championships Friday night, all of the hard work and preparation, some of which has been put in for years, seems to have been wasted without the closure of playing the title games.

Everyone is disappointed, from the coaches down through the fans and administrations of the school districts — but they also know that these are extraordinary times that call for extraordinary measures.

“I was just getting the kids adjusted to playing a game without their friends and classmates there,” said Dowagiac coach Danum Hunt when he got the news that the tournament was suspended. “They were just beginning to stomach that. I feel bad mostly for the seniors, who had an opportunity to possibly win a district championship and make a longer run in the state tournament.”

Hunt said that the kids work really hard throughout the season to get to that point, and to have it just taken away from them is heart-wrenching for them and himself.

“All throughout the season, I tell them that these 20 games during the regular season help prepare them for the real season, which starts in March,” he said.

Hunt also knows that the reality of what is going on not only in Michigan, but the country and the world is more important than some high school basketball games.

The one bright spot for Dowagiac is that senior D.J. Lanier surpassed 1,000 career points on Wednesday night.

“We said he was able to accomplish that career goal,” Hunt said. “That is a great achievement for any player who can reach that mark. I am glad we were able to get that done. Originally, we thought he was a little bit farther away from that, and that it was going to take the entire district tournament.”

Cassopolis seniors Gage Collins and Matthew Anderson are also disappointed that sports have been suspended for at least a few weeks.

Collins was able to compete in the state wrestling finals last week and wrap up his winter sports season, but was looking forward to spring sports, which are now in limbo.

“I hope we have a season, and I think that shutting everything down, like the NCAA and all that, is really too much hype into this,” he said. “I really do not think it is that bad, but I understand you have to have safety precautions. I think they are overdoing it a bit.”

Anderson and the Rangers were preparing to play rival Brandywine for a district title. But within a matter of a few hours, everything changed.

“It is hard because you work so hard for 20 games just to try and win the conference championship, and then you play two more games toward winning a district championship,” he said. “You are one step closer to your goal, and then it is like why did we even try? It just got taken away from us.”

Brandywine’s Brock Prenkert and Gabe Gouin both are feeling anger and pain over the decision not to continue.

“I was a little bit upset because I am a senior,” Prenkert said. “It was kind of an abrupt way to go out. It’s just kind of sad because that was the last game I’ll ever play and I didn’t even know. I was kind of wanting to go down as a district champion.”

Gouin also talked about the suddenness of the situation.

“It was kind of heartbreaking because I thought this team would go far in the postseason,” Gouin said. “I didn’t know it was the last game so it kind of hurt.”

Prenkert remembers the feeling as his coach told the team about the decision on Thursday.

“We were sitting on the stage in the gym when [Coach Nathan Knapp] broke the news and a lot of us were pretty upset,” Prenkert said. “We didn’t know how to react and we didn’t know what to say. We were conference champs and we were 18-3. It was a great way to go out with a win and everything, but the way it ended just sucks.”

Gouin knows he still has another year of basketball, but for the seniors, it might all be over.

“There were a couple kids crying,” Gouin said. “I was still hurt but I have next year, but this team was a special, I felt. It was a good team. Cassopolis beat us two years ago in the district championship, too, so we really wanted to beat them this year.”