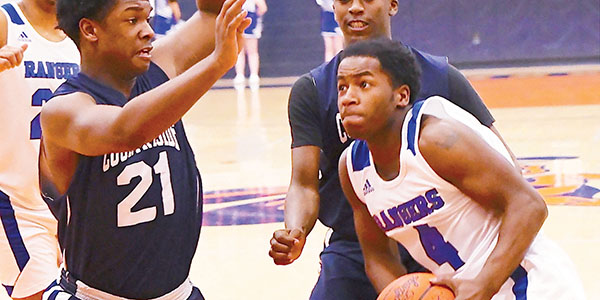 BRIDGMAN — The scoring line may not show it, but Wednesday night’s Division 3 semifinal showdown between Cassopolis and the Benton Harbor Countryside was much closer and could have gone either way.

Behind the stellar play of the Countryside’s star sophomore Jamere Matlock, the Cougars almost clawed their way from a 19-point halftime deficit in the third quarter, cutting the lead to 38-35 with 4:32 remaining.

“I’ll be honest. It was ugly,” said Cassopolis coach Ricky Evans. “We played to their level. That’s all I have to say about that.”

The Rangers found themselves down early in the first quarter, but went on a 7-0 run to end the frame and then outscore the Cougars 20-7 in the second quarter.

Behind Cassopolis’ first-half offensive spurt was the junior three-headed monster of Kasmir Buck, Ahsan Hart, and Jerry Johnson. Together, they scored 23 of the Rangers’ 36 points, and the game seemed to be out of hand.

“They all played well,” Evans said. “That is one of the few good things about tonight. Those kids come to practice, they work hard, and they got their chance. They did what they were supposed to do.”

Unfortunately, all of their hard work seemed to go by the wayside, but ultimately the Rangers were able to gather themselves after Evans called a timeout and led 47-39 at the start of the fourth quarter.

“I hate games like this,” Evans said. “You can try everything in the world to get the kids hyped, but sometimes things like this just happen.”

Continued Rangers support did not happen from star player Darrion Gatson in the game, even though he did chip in the five points and three rebounds. Instead, it came from sophomore big man Daishean Jamison.

Jamison had nine points and eight rebounds to go along with two assists to help lead the Rangers to the victory.

“He didn’t play last year as a freshman,” Evans commented. “So, this being his first full year on varsity, he is really stepping into his role. Our supporting cast really stole the show tonight.”

Cassopolis was supposed to go for its fourth consecutive Division 3 district championship tonight against Brandywine, but the Michigan High School Athletic Association announced the suspension of the state tournament until further notice Thursday afternoon.

The Bobcats are also looking to repeat as Division 3 district champs as well. They defeated Watervliet 55-47 in the other semifinal game.

“We need to come out better against them [if we play],” Evans said. “They are very talented.  Both teams will be hungry.”