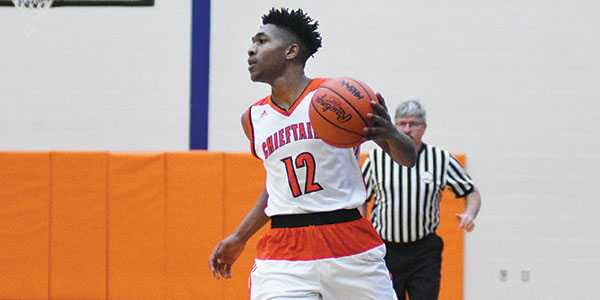 Dowagiac rolls into finals, but may not get to play for title

EDWARDSBURG — The excitement of winning a district championship has been put on hold as the Michigan High School Athletic Association announced Thursday afternoon it was suspending the winter sports tournaments.

No games will be played until further notice.

Dowagiac and Buchanan were scheduled to face off for the Division 2 boys district championship at Edwardsburg High School tonight.

Thursday morning, the Michigan High School Athletic Association announced that fans would not be allowed to attend basketball games this weekend. Only parents, legal guardians and essential administrators will be allowed to attend the games, as well as credentialed media members.

At approximately 3 p.m. Thursday, the word came down that everything would be put on hold due to the COVID-19 outbreak.

Dowagiac (16-6) rolled into the championship with an 82-54 win over Berrien Springs in the second semifinal Wednesday night. The Bucks (18-3) reached the title game with a 67-58 win over rival Niles.

The Chieftains used a 24-point second quarter to turn the game into a rout. Dowagiac led 17-12 after one quarter and 41-16 at halftime.

Chieftain senior D.J. Lanier poured in 20 points in the first half, which led all scorers on the night. He also eclipsed the 1,000-point plateau for his career.

“I think the 1,000-point thing was looming over his head for a while, so it was a little added self-pressure,” Hunt said. “He was able to relax tonight and was able to go out and knock down some baskets. Hopefully, that is the start of something good.”

Dowagiac was firing on all cylinders right from the start. The Chieftains brought the energy that helped it win 15 games.

“The thing we work on every day in practice is coming out with energy and intensity and effort,” Hunt said. “When we do that, we are not a bad ball club. As long as we can be consistent for 32 minutes, we have been successful. Hopefully, we can continue to do that.”

Hunt said that the team’s focus for Buchanan, if they play, would be playing “Dowagiac basketball.”

“We have seen teams like them with some size in the Wolverine,” he said. “I do not think it is any different than we have faced within our conference. We just have to go out, stay sharp and have energy and intensity, and a maximum effort for four quarters.”

Besides Lanier, Dowagiac got 10 points off the bench from Cole Weller and eight points from Cailyn Murphy and Stewart Smith.

Buchanan had to fend off pesky Niles with two of its best players sitting on the bench serving a one-game suspension for being tossed out of the Bucks’ regular-season finale at Bridgman last Friday night.

Despite not having Chris Young and Brad VanOverberghe, the Bucks were able to defeat the Vikings 67-58.

Buchanan turned to its big man, Logan Carson, and Gavin Fazi to pick up the scoring slack. Both did more than that as they combined for 41 points and 21 rebounds.

The Bucks were never really able to pull away from the Vikings (2-19) until the fourth quarter.

Buchanan led 19-14 after one quarter and 31-28 at the intermission as Niles was able to knock down from shots from the perimeter to stay in the contest.

The Bucks opened up a 40-35 lead heading into the fourth quarter. Buchanan scored the first 13 points of the final quarter to open up a 53-35 lead, which it never relinquished, thanks in part to John Gartland, who scored 13 second-half points.

Niles made one final run at the Bucks as it got hot from beyond the 3-point line. The Vikings finished the night with 16 triples. Cerious Wilson led Niles with 16 points, while Adrian Thomas added 15 and Brayden Lake 12.

Veteran Buchanan coach Reid McBeth was happy with the effort his team gave despite being shorthanded.

“Our kids knew they had to show up and play hard,” he said. “We knew somebody was going to have to step up. Obviously, our plan was to throw the ball into Logan and Gavin as much as we could. The first half, we did that. Then Niles went to a 2-3 [zone], which we really haven’t seen much this year, so we really had not worked on it much. It took us a while to adjust, but we did.”

Buchanan and Dowagiac did not meet during the regular season, but McBeth understands the challenge ahead of his squad. if they do.

“Obviously, Dowagiac is going to press you and get after you,” he said. “They have played some pretty good teams this season. It is going to be a dogfight. Our kids will be ready and we will show up. I know Chris and Brad will be excited to play.”