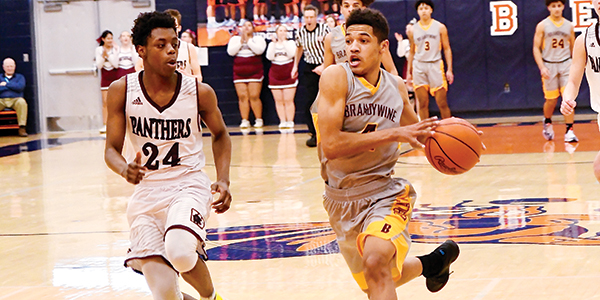 Bobcats advance to finals that may never be played

BRIDGMAN — Back in January, the Brandywine Bobcats hosted Watervliet and gave the Panthers their worst loss of the season.

Fast forward nearly two months later, and both teams would meet again, but this time in a Division 3 district semifinal hosted at Bridgman High School, with the winner scheduled initially to advance to play Cassopolis for the championship tonight.

Thursday morning, the Michigan High School Athletic Association announced that fans would not be allowed to attend basketball games this weekend. Only parents, legal guardians and essential administrators will be allowed to attend the games, as well as credentialed media members.

At approximately 3 p.m. Thursday, the word came down that everything would be put on hold due to the COVID-19 outbreak.

While it was not easy, the Bobcats (18-3) were able to hold the lead throughout the entire game and defeat the Panthers 55-47 Wednesday night.

“A little different story tonight,” said Brandywine coach Nathan Knapp. “I think our kids were trying a little too hard in the first half. We were working hard but making too many mental mistakes and gambling a lot. Two years ago, it was a similar story. We beat them by 35 points, and then it takes us two overtimes to beat them again in districts.”

Offensively, both teams combined for 37 points in the first quarter. Brandywine made 75 percent of their field goals and Watervliet 55.

Brandywine senior Shane Brown had himself quite a first half. He started off the night with an emphatic slam dunk and had two more in the second quarter. He also added three rebounds and three assists in the half.

“Honestly, it’s nothing new to me now,” Brown said of his dunking ability. “But it gets the team going, and it gives us energy, especially in a game like this with it being districts.

Leading at halftime 31-27, Brandywine started letting the lead slip. With the score reading 39-36 with a couple of minutes remaining in the third quarter, the Bobcats were able to gain a little cushion on 5-0 run and keep the eight-point lead all the way until the end.

“We’ve got fighters,” Knapp commented about his team’s response to the diminished lead. “These kids are very gifted athletically, and sometimes, I wished they would turn it on the whole game. I’m very proud of the way we fought until the very end.”

Brown continued his air support in the fourth quarter with two more dunks, giving him five on the night and had a team-high 15-points. He also finished with five rebounds, five assists, and three steals.

“It’s a breezy night for [Brown],” Knapp said. “The great part about Shane is he can turn it on any night he wants.  He is one of our leaders and always takes on the court defensively.”

“I feel I played well tonight,” Brown said. “It was a rough one for the team, but we will be looking to bounce back on Friday night.”

BRIDGMAN — The scoring line may not show it, but Wednesday night’s Division 3 semifinal showdown between Cassopolis and the... read more