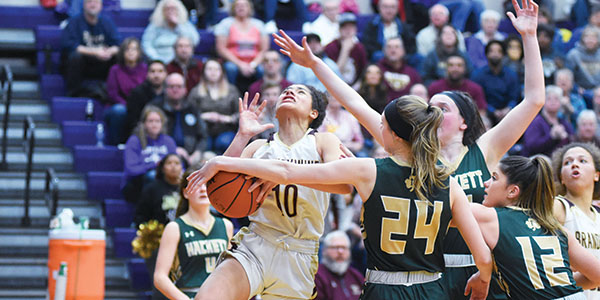 SCHOOLCRAFT — It did take very long for veteran Brandywine coach Josh Hood to realize his team was in trouble against Kalamazoo Hackett in the Division 3 regional semifinals at Schoolcraft High School Tuesday night.

He could tell before the game that his team lacked energy. The Bobcats were never able to find that energy in a 49-43 loss to the Fighting Irish, a team it beat by 18 points during the regular season.

“It just came down to energy,” Hood said. “You can’t show up at a regional and coast. Their No. 34 (6-foot-2 Krystina Kasson) played the entire game, and we’ve got to come out every two minutes. That’s on the coach. I guess I didn’t do a very good job of getting us in shape. I take full responsibility.”

Energy was not the only factor that doomed the defending regional champion Bobcats. Brandywine shot 36 percent from the field (16-of-45) and was outrebounded by Hackett 37-14. The Bobcats, who pride themselves in playing great defense and creating turnovers, had 10 miscues of their own.

Brandywine went from hitting a school-record 16 3-pointers in the district championship game to going 6-of-26 from outside the arc against the Fighting Irish.

“Hackett did a great job with the zone,” Hood said. “They had played man all year. Like against Gobles two weeks ago (in Brandywine’s other loss 39-33), we did not spread the court and did not attack from the baseline or middle opposite. The biggest thing was we weren’t even face-guarding in the first half. That’s not being ready to play. I take full responsibility. I did not have our team ready to play at a high level, and when you’re not energized to play in a regional, it’s a coaching problem.”

Brandywine led twice in the game, both in the opening moments of the first quarter. After hitting its first shot to go up 2-0, junior Malikiyyah Abdullah hit a 3-pointer to give the Bobcats a 5-3 advantage.

Hackett (20-4) would outscore Brandywine 7-0 to take a 10-5 lead heading into the second quarter.

The Fighting Irish built a double-digit lead in the second quarter, leading by as many as 12 points before settling for a 25-14 advantage at halftime. The lead was as many as 13 points in the third quarter as Hackett was able to score from outside and in the paint.

The Fighting Irish led 35-29 heading into the final quarter.

The Bobcats played their best basketball of the night to end the third quarter and to start the fourth.

Brandywine outscored Hackett 17-6 over the stretch to cut the lead to 35-33.

The Fighting Irish then went on a run of their own, 12-2, to push the lead back toward double digits.

Whatever energy the Bobcats had in the second half wore off down the stretch, leaving five Brandywine seniors with the reality they were playing their final high school basketball game together.

“A 22-2 record is a really good season,” Hood said. “We’re very disappointed in the loss tonight and it should hurt. But when the girls reflect on their careers, they did a heck of a job representing this community with a lot of pride and class. They’re great student-athletes. I think the five seniors had an 86-13 record, but most importantly, they’re all great students with 3.5 grade points. They’re great kids, and they’ll do well in life.”

Krystina Kasson had a game-high 21 points to lead the Fighting Irish, who advance to tonight’s regional championship game to face host Schoolcraft. The Eagles defeated Gobles 42-41.

NILES — While municipalities and universities around the country, as well as in Michigan, begin to take steps to slow... read more