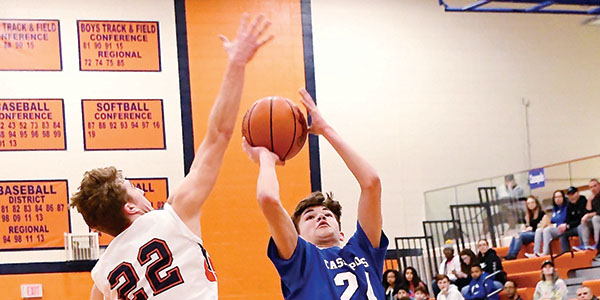 Winter contact sports were given the go-ahead to being competition beginning Monday. (Leader file photo)

Rangers get revenge on Bridgman

BRIDGMAN — Two and half months ago, Bridgman traveled to Cassopolis High School during the holiday break in an early-season matchup with the Rangers.

Bridgman walked away 70-60 winners, and once the Division 3 District 77 seeding came out for the MHSAA tournament Monday night, the Rangers had another chance to swat the Bees.

Behind Darrion Gatson’s 14 points and a nine-point third quarter by Ahsan Hart, the Rangers (16-5) took the sting out of the host Bees (15-6) by way of 44-38 victory that allows the Rangers to advance to tonight’s semifinals at Bridgman High School.

Cassopolis got off to a slow start, finding itself down early and struggling to make shots. Starter Jerry Johnson received two fouls and missed time on the court. Gatson kept the Rangers around with eight points in the first quarter.

“[Gatson] has really grown this year,” said Cassopolis coach Ricky Evans. “His leadership has shown, and he does a great job of keeping the team in check.”

Gatson added his third 3-pointer of the game in the second quarter and finished with four of them on the night.

The Rangers grabbed a 15-13 lead with 4:39 left in the second quarter and never trailed again.

The game picked up tempo during the third quarter, and going for a loose ball, Gatson hit his knee on the court and limped off. Hart scored all nine of his points in that frame and kept the Rangers on top heading into the final quarter.

“I really liked our aggressiveness and rebounding,” Evans said. “We did an excellent job of boxing out tonight.”

The Rangers were able to hold off a potential Bridgman rally in the fourth quarter. Cassopolis forward Matthew Anderson finished with 10 rebounds (four offensive). Bridgman was without starting center Hunter Adams.

Adams injured his knee at the end of the regular season and was out for the contest.

“The last time we played them was 2:30 in the afternoon on a Saturday,” Evans said. “I’m sure none of our guys went to sleep that Friday night. Plus, [Bridgman] had their big guy then, and he was a lot. I feel so bad for him, I really do.”

Turnovers and free throw shooting were the Achilles heel of Cassopolis throughout the night. The Rangers shot 3-of-11 from the charity stripe, which kept the game close.

“You know you can’t forget that,” Evans said. “So, you know what we will be working on tomorrow?”

The Rangers will continue their quest for a fourth straight district championship against Benton Harbor Countryside Academy (7-11) in the second semifinal, slated for a 7:30 p.m. tip-off.  Brandywine and Watervliet will be in the other semifinal at 6 p.m.

The championship game of the Division 3 district tournament is scheduled for 7 p.m. Friday night.

Tickets are $6 per person, and no passes will be accepted.

The winner advances to the Bronson regional, which begins Monday.

CASSOPOLIS — For the sixth year in a row and the 10th time in 11 years, the Brandywine Bobcats raised... read more