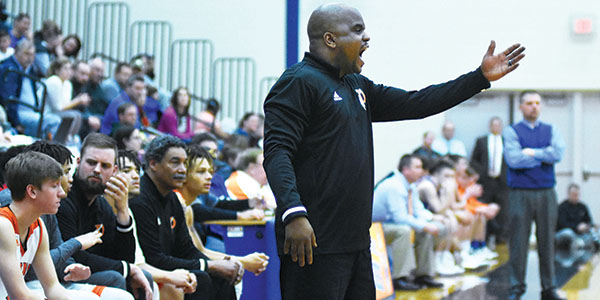 Dowagiac coach Danum Hunt shouts out structures to his team during the Chieftains’ 59-49 win over Edwardsburg in the Division 2 district opener Monday night. (Leader photo/SCOTT NOVAK)

EDWARDSBURG — The third and final meeting between Wolverine Conference South Division arch rivals turned out to be a combination of the first two times Dowagiac and host Edwardsburg faced each other this season.

In the first meeting, a 61-46 victory by the Chieftains just before the Christmas break, Dowagiac was able to force the tempo of the game, which led to numerous turnovers by the Eddies. In the second meeting, Edwardsburg was able to play at a pace that it was comfortable in. The Eddies win that game 51-45.

Edwardsburg and Dowagiac traded runs throughout the first half of the Division 2 boys district basketball tournament opener Monday night. Each team was able to dictate the tempo during their runs, but could not maintain it.

In the second half, the visiting Chieftains took control of the game by forcing an up-tempo game, which resulted in a 59-49 victory by Dowagiac, which advanced it to tonight’s district semifinal against Berrien Springs.

“The message at halftime was we had to go out and put together a solid half,” said Dowagiac coach Danum Hunt. “Usually, we come out and start the third quarter lackadaisical most games. I told them we have to come out and pick it up and do things differently than we have in the past. The guys were committed to it.”

After using a 13-0 run to end the first half and take a 29-24 lead into the locker room, Dowagiac did not get off to the start Hunt wanted and found itself deadlocked with the Eddies at 31-31 midway through the third quarter.

The Chieftains (15-6) turned up the defensive pressure on Edwardsburg, which had trouble handling the basketball all night. The Eddies finished the night with 19 turnovers, which Dowagiac used to score easy transition baskets.

An 11-0 run in the third quarter gave the Chieftains the lead for good. Dowagiac led 45-34 heading into the fourth quarter.

The Eddies (12-9) made one last run at Dowagiac in the final eight minutes, but another run, this one 8-0, proved to be the dagger.

“The guys had a sour taste in their mouths from the one we lost here a couple of weeks ago,” Hunt said. “Tonight, they were really focused on getting this one back.”

Edwardsburg was able to hold Dowagiac leading scorer D.J. Lanier to seven points, but it was his 3-pointer late in the fourth quarter that sealed the victory for the Chieftains.

Hunt said that even when Lanier is not leading the way in scoring, Dowagiac has options on offense.

“All season, we have had guys who are capable of putting the ball in the basket,” he said. “Brooks is capable of putting the ball in the basket. Brookins has had a couple of 30-point nights. So, we have other guys who can score. Stewart Smith stepped up huge tonight with a career-high. Stewart is what I call ‘our silent assassin’. You kind of forget about him because he is out there surrounded by seniors, but if you leave him open, he certainly can know down that mid-range jumper. He was able to step up tonight.”

Brooks led the Chieftains and all scorers with 19 points, while Brookins added 13 off the bench, and Smith added 12 points.

Dowagiac will face another team that was on its regular-season schedule when it takes on the Shamrocks tonight.

“We just played Berrien a few weeks ago,” Hunt said of the Chieftains’ 76-48 victory. “They are young and scrappy. They hustle and are a team you cannot take lightly because if you let them hang around, it will be a tough fought battle.”

Niles (2-18) and Buchanan (17-3) will play the first semifinal at 5:30 p.m. today with the Chieftains and Shamrocks capping off the night with tipoff set for approximately 7:15 p.m.

Rangers get revenge on Bridgman

BRIDGMAN — Two and half months ago, Bridgman traveled to Cassopolis High School during the holiday break in an early-season... read more