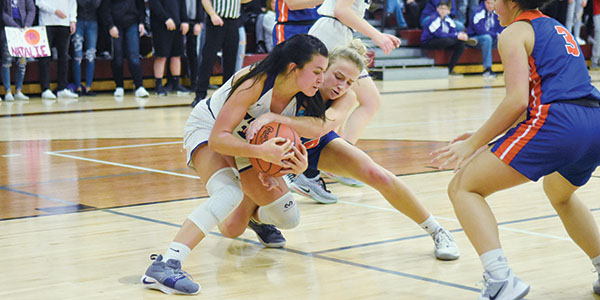 BUCHANAN — It was not the end that Edwardsburg coach Jon Pobuda wanted for his senior class.

The Eddies, who were the two-time defending Division 2 district champions, could not hold on to a first-half lead and dropped a 48-37 decision to Wolverine Conference rival Three Rivers in the championship game at Buchanan High School last Friday night.

Edwardsburg (21-2) and Three Rivers (20-3) split the Wolverine Conference South Division title this past season, just as they had split the last four district championships.

Eddies seniors Alyssa Simmons, Amyah Swartz, Claire Bartz and Abbey Krugh will leave a lasting legacy. The group finishes with more career victories than any other senior class, according to Pobuda. They also leave behind a legacy of winning championships, both conference and district titles.

On this night, however, it would be a senior from Three Rivers wanting to leave her mark on a program that got the upper hand with a little help from her friends.

All-State point guard Hadley Miller helped lead the Wildcats to a second district title in four years after earning a share of the South Division crown. This all coming after suffering a head injury that forced her to miss several weeks midway through the season.

Edwardsburg looked like it was going to have its way with Three Rivers in the opening quarter, but the Wildcats would not go away. Thanks to the play of junior Kali Heivilin in the paint, Three Rivers was able to keep it close and trailed 20-19 at halftime.

Miller got the Wildcats rolling in the second half. Struggling to score from the field, Miller decided to go to the basket. She and Heivilin helped Three Rivers score the first eight points of the third quarter, while at the defensive end, the pair forced Edwardsburg into 2-of-13 shooting and very few second chances.

The result was a 35-24 lead heading into the fourth quarter. The Eddies were never able to make up the ground.

“The key was making sure that we kept her out of the paint,” said Edwardsburg coach Jon Pobuda about the game plan for Heivilin. “If we kept her away from the basket, we were OK. But at times we had trouble doing that. And in the fourth quarter we got it down to six, they got a loose ball and she put in the putback. That’s how tough she is. She’s a hard-nosed kid. She’s one of those girls who every coach wants on their team, but you don’t want to play against.”

Three Rivers did not shoot the ball particularly well during the district tournament, but that was not going to force them away from the things that got them to the title game.

“We wanted to stick with the same thing that got us here,” said Three Rivers coach Jason Bingaman. “That was playing good defense, rebounding and using our speed when we had opportunities. We stuck with the course. Again, we didn’t shoot well in the first half, but we felt pretty good in the locker room at halftime. We felt if we kept playing our game defensively and not giving up easy buckets, that some of the shots would start to fall … and they did.”

Claire Bartz wrapped up her career with 15 points and seven rebounds, while Krugh finished with 14 points and six boards.

“Our senior class has given us so much,” Pobuda said. “I think they are going to graduate with more wins than any other group that has gone through Edwardsburg. They have laid the foundation for what we are all about. That is going to championships and competing for championships. Hopefully our young girls picked up on that and we can continue to build off of their legacy. Every year we have that senior group step up and talk about building a new legacy and that is what they did for us.”