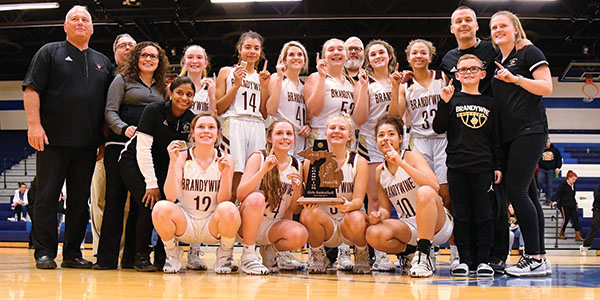 CASSOPOLIS — For the sixth year in a row and the 10th time in 11 years, the Brandywine Bobcats raised a Division 3 district championship trophy after defeating the Decatur Raiders 73-25 at Cassopolis High School.

On Friday night, the Bobcats faced a Raiders team that boasted a talented squad featuring the school’s all-time leading scorer in Regan Rose. Decatur had defeated host Cassopolis in the other semifinal.

It was important for Brandywine to get off to a good start.

Through two games in the state tournament, Brandywine had slow starts in the opening quarter totaling 23 points in those contests. In Wednesday night’s semifinal win over Watervliet, the Bobcats missed 26 shots in the first half alone.

Within the opening six minutes of the championship game, Brandywine had already scored 24 points and led 30-9 after the first quarter.

“We have been waiting to shoot it well,” said Brandywine coach Josh Hood. “We picked a really good time to do it. Although that’s just a bonus, we pride ourselves in our defense. To hold a very talented Decatur team to 25 points says a lot about our girls. You are going to win championships by playing defense, and we did that by forcing [Decatur] out of their rhythm.”

Brandywine would add five more 3-point baskets in the second quarter and led 43-15 at the half. Six different Bobcats had a 3-pointer in the box score by then.

“We give our girls the green light,” Hood said about shooting 3-pointers. “Tonight, we had eight girls make one, and that’s what makes this team special. We executed to perfection our game plan against the Decatur zone.”

The Bobcats did not slow down in the second half, and with less than three minutes to go in the third quarter, put the mercy rule running clock into effect when they went up by 40 points (62-22).

Brandywine would also make a school-record 16 3-point shots on 27 attempts. The previous record was 14.

The entire Brandywine roster scored at least a point once sophomore Haley Scott made a free throw with a minute left in the fourth quarter.

“That’s the versatility of this team,” Hood said. “It was very exciting to see all of the young girls play towards the end of the game. This was a great experience for them and very proud of our bench tonight.”

Brandywine will face Kalamazoo Hackett Catholic Prep in the Schoolcraft regional semifinal at 5:30 p.m. today. The Bobcats defeated the Fighting Irish 46-28 in December.

Gobles (Brandywine’s only loss of the season) and host Schoolcraft will tip off in the other semifinal slated to begin at 7 p.m.

“We worked really hard to win this district championship,” Hood said. “We are going to enjoy it tonight.

But the one thing about Brandywine is we will not be content just being at regionals. We are going next week to try and win the thing.”

BUCHANAN — It was not the end that Edwardsburg coach Jon Pobuda wanted for his senior class. The Eddies, who... read more