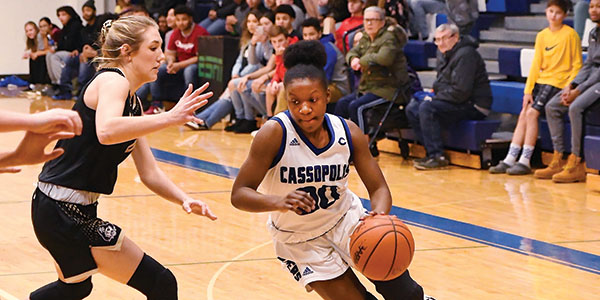 CASSOPOLIS — Wednesday night’s Division 3 District semifinal game was unlike any other for Cassopolis senior Angel Gary.

A four-year varsity player for the Rangers, everything she has done and worked toward culminated into one moment.

“I was hyped,” Gary remembered when she stepped on the court for what could be her last time. “The team was ready too. We knew that we had the opportunity to beat [Decatur].”

Gary might have been a little too excited, picking up a technical foul just minutes into the first quarter after she drained a shot in the face of Decatur center Jania Green.

“I’ve never seen that before,” said Cassopolis coach Janice Gatson with a laugh. “That’s the first time that’s ever happened.”

Down early, Cassopolis rebounded to take a brief 12-11 lead, but ultimately trailed 14-12 after one quarter and could never regain the lead.

“We were battling,” Gatson said. “We had really great practices, and we were very upbeat. That is until the fourth quarter, and then it went downhill from there.”

Unfortunately for the Rangers, Decatur spoiled the party and the opportunity to play for a district championship by the score of 65-36.

“Very, very sad,” Gary said of her last game in a Rangers uniform. “We played hard out there. But once the game started coming to a close, I realized that this was it, and it’s on to the next chapter.”

Also on the soccer team at Cassopolis, Gary’s next chapter in her basketball career is to play at the college level. Although she would not say what colleges, she is very optimistic.

Reflecting on her time donning a Rangers uniform, Gary used her experience to give the underclassmen on the team some much-needed words of wisdom.

“I told them that they have to be the leaders for the younger girls,” Gary said. “Freshmen will be lost like I was myself. Hold them accountable and step up their game.”

During her time as a Ranger, Gary was a part of a 32-50 record that she will always remember as fun.

“We had great teams,” Gary mentioned. “Even though each season was tough, I still had fun. Everyone was friendly.”

Decatur and Brandywine will tipoff at 7 p.m. in the title game.

Tigers run too much for Bobcats