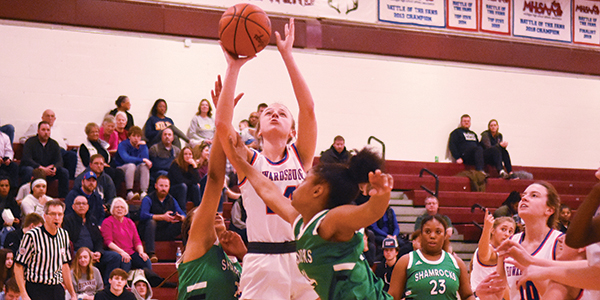 BUCHANAN — The preliminaries are over.

Thanks to the new seeding of the top two teams by the Michigan High School Athletic Association in the girls district tournament, Three Rivers and Edwardsburg will meet in tonight’s Division 2 championship game at Buchanan High School.

The top-seeded Eddies (21-1) punched their ticket to the finals by blowing out Dowagiac (71-15) Monday night, and then Berrien Springs 64-28 in Wednesday’s second semifinal.

The Wildcats, the No. 2 seed, knocked off host Buchanan 53-25 on Monday night and then had to withstand a scrappy Niles team in the other semifinal on Wednesday, winning 47-45 on a basket by Kali Heivilin with eight seconds remaining.

Edwardsburg and Three Rivers shared the Wolverine Conference South Division championship after split games on the road with each other. The Wildcats traveled to Edwardsburg and won 62-44, while the Eddies returned the favor in the second meeting by defeating Three Rivers 56-32. The Wildcats (19-3) were without all-state point guard Hadley Miller in that contest due to injury.

Both teams are going to have to play better than they did in the semifinals.

Three Rivers has shot poorly from the field in both of its wins, including its 27-percent (14-of-52) against the Vikings.

Edwardsburg shot the lights out on Monday night, but struggled from the field against Berrien Springs. Veteran Eddies coach Jon Poduba thinks his team lacked intensity against the Shamrocks.

“Tonight, we were guilty of looking ahead to Friday,” he said. “We know what is ahead of us. We are excited for it.”

Pobuda said defense will be the biggest key against Three Rivers.

“Defensively, we need to stay in front of them and not give them easy buckets in transition,” he said. “We need to keep them off the boards and limit their second-chance opportunities.”

On the offensive side of the ball, having seniors Claire Bartz and Abbey Krugh playing at their peak has been important, as has been the play of Macey Laubach in the post.

“Having Abbey and Claire playing well together has been huge for us down the stretch,” Pobuda said. “That is what we needed. It has taken them the majority of the season to get here, but now is the right time. Hopefully, they can keep it going and have big games Friday night.”

When teams attempt to shut down either Krugh or Bartz, the Eddies can look to Laubach for scoring.

“Macey has been tough,” Pobuda said. “Staying out of foul trouble is going to be big, too. We need to keep Macey in the middle, and we can keep her confidence up. If she is playing well, and Abbey and Claire are playing well, I like our chances.”

In the first semifinal, the game had nine ties and 13 lead changes. In the end, it was free throw shooting that did in the Vikings.

Senior Alycia Patterson ended her career with nine points. Patterson leaves the Vikings as its all-time leading scorer with 1,216 points.

In the second semifinal, Bartz led the Eddies with 17 points, with Krugh adding 11 and Ella Castelucci 10.

Tonight’s championship game is slated to tip off at 6 p.m. Tickets are $6 per person.