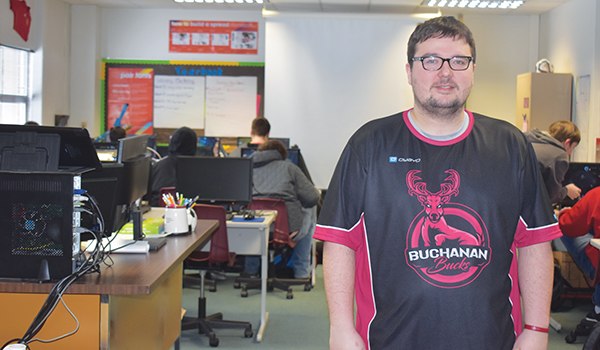 BUCHANAN — March 17 is a big matchup for the Buchanan Bucks, said Bryan Pearson, one of Buchanan High School’s newest coaches.

That day, his varsity team will take on Lakeshore High School, where they hope to swiftly destroy their rival, take down their defensive turrets and take over their core building.

Pearson, an intervention facilitator by day, coaches Buchanan’s League of Legends esports team after the school bell Tuesdays and Thursdays from the high school’s computer lab.

The group is in its inaugural year and its second season in the brand-new Southwest Michigan Esports League. Berrien Regional Educational Services Agency launched the group last fall. Now, it has 22 teams from Berrien and Van Buren counties.

The teams play League of Legends, where teams work in groups of five to overcome enemies, take down defenses and ultimately take over a rival home base, called a Nexus. Players do so by using one of 148 champions, characters with their own special abilities and backstories.

Esports came to Buchanan because people on staff saw that it offered students a new activity to take part in. The sport also has a growing presence in colleges, and scholarships are being offered for it.

Buchanan has two teams, varsity and junior varsity. Each has eight members, five that play during weekly competition and three that act as alternates.

“It’s great seeing these boys work together for a common goal,” Peason said. “I think some good friendships and teamwork has come out of it. I hope we can continue it and maybe make it even better.”

Both of Buchanan’s teams scout rivals, strategize and play together twice a week after school. Many practice together on other evenings from home on their own computer consoles.

Juniors Kaiden Nichols and Sam Poole were encouraged by friends to join for the esports’ winter season. The comradery and competitiveness has kept them in.

They play varsity with Nick McKean, who joined in the fall. He joined with no experience at all.

“It was fun to learn,” he said. “I think I picked it up pretty quickly, but there’s always room for improvement.”

Pearson said the majority of team members had never played League of Legends before. Like Nichols and Poole, he had played casually — in his case, in college between studying for a physics degree.

He used his knowledge to provide the base for new players, but the students also helped teach the game, too, he said.

“It’s cool being on a team, being more cohesive and also helping others learn how to play the game,” Nichols said.

Now, everyone comes together to strategize, practice and, on Tuesdays, compete in a head-to-head match usually lasting about 20 to 50 minutes.

Scouting is a big part of prep work. Buchanan will check to see which characters have been temporarily banned and what other teams have been doing.

From there, the varsity and JV teams will adjust their playing style, character selection and individual duties as needed.

“It almost feels like a sport because there’s five different positions and everyone has their own job,” Pearson said. “You play as a team. You compete as a team.”

For instance, McKean plays bulky characters that can deal big damage to the enemy. Poole plays top lane, meaning he chooses characters meant to take a game’s objectives head-on. Nichols plays jungle, meaning he wipes out minions in an intermediary zone of the game’s map, where no team has dominance.

All three playing styles, and good communication, help the Bucks take control of an enemy Nexus.

This season, they hope to earn a spot in the conference’s tournament. While most matches are played remotely, teams play together at the tournament at Lake Michigan College.

Buchanan missed the spot by one place in the fall. Ultimately, they hope to knock off top-ranked Berrien Springs.

If that falls through, however, Nichols is confident next school year’s season will yield strong results. The varsity team is poised to return all its members.