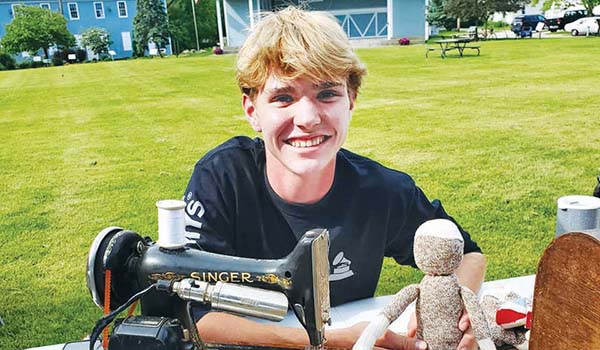 BUCHANAN — On a quiet day at Alan Robandt Antique, Vintage, & Modern, customers may hear a faint humming from the floor above.

The 1906 Singer sewing machine creating that sound is much, much louder up close. Kadin Mills creates it when he presses his foot against the pedal beneath the table it is attached to.

The Buchanan High School senior has knocked the power off at the store turning it on before. The work he does, however, is more delicate than the power that pushes its needle.

Mills is stitching Rockford Red Heel Socks. With sunlight pouring in from windows, Buchanan’s downtown in front of him and half-finished figures nearby, he sets about making sock animals. He sells them through orders and at public market events.

His business is called Barrel of Monkeys, which can be found on Facebook and Instagram (by adding a “z” to the end of the title) or through its website, barrel-of-monkeys-102798.square.site/home.

Mills’ family often gives handmade gifts at Christmas. That led to the creation of his first sock monkey, Reggie, in 2018. Now, Reggie is the mascot of Barrel of Monkeys, appearing to manage its social media accounts and posing in pictures in his and his “human’s” exploits.

If it were not for an antique sewing machine, however, Mills may not have begun his business.

“That was what really inspired me to start sewing in the first place,” he said. “I had this beautiful sewing machine, and I didn’t know how to use it. So, I learned to sew. I had it repaired at Michiana Vac & Sew on 11th Street, and then the rest is history.”

Mills is referring to his 1927 Singer sewing machine — he added the 1906 version and an 1897 machine to his collection later.

He realized the business viability of sock monkeys and other creatures after his friends saw a completed set of animals, from a moose to a sloth.

Mills began taking semi-custom requests — size, color, species — and soon began setting up shop at markets, a sewing machine and a slew of sock animals with him.

He appears most at the Buchanan Farmer’s Market, which he said has an aesthetic that appeals to him.

“That’s where most of my fan base is, and it’s a great way to meet new people,” he said.

Between crochet-makers, farmers and jam-makers, he soon found a niche in clientele. Those his age liked the animals because Generation Z appreciates nostalgia and local art, he said. Those between 50 and 70 grew up with sock monkeys and tend to pass down their appreciation to grandchildren and other young family members.

Mills uses the same iconic garment that sock monkeys were most notably made out of, the Rockford Red Heel, now owned by Fox River. They feature a seamless red heel, seamless toe and a heather gray body.

“They have to be the Rockford Red Heel, because that’s where you get the mouth and the butt,” he said. “Otherwise, it’s not a sock monkey. It’s a monkey-shaped sock.”

That does make his sock animals pricier than what he called the “Walmart variety.” Two pairs of Redford socks, good for two sock monkeys, cost about $14.

Mills also puts in about two hours of careful work with a standard sock monkey, ensuring seams are properly stuffed and the final product can sit upright without tipping.

“I spend a lot time making sure that it’s really good quality, that they have enough stuffing in them so that doesn’t turn into a limp noodle,” he said.

His business has allowed him to make upwards of 60 different sock animal creations. Some of his zaniest were unicorns, a giraffe, Salvadore Dali and the band members of Kiss.

Right now, with a “goose-egg” inventory and market season a ways away, Mills said he is focusing on making custom requests.

Mills said the best way to order a sock animal is through his website or by emailing barrelofmonkeys.buchanan@gmail.com.