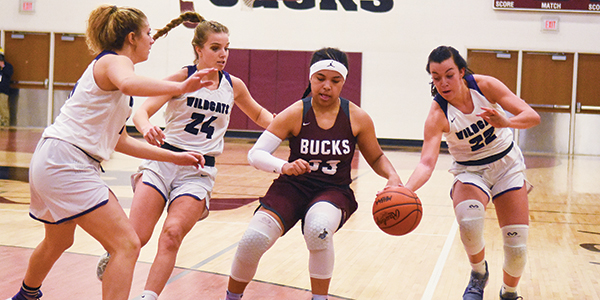 BUCHANAN — Being a young basketball team can have its ups and downs. For the Buchanan Bucks, there were more ups than downs during the 2019-20 girls basketball season.

One of those downs came Monday night when the Division 2 district tournament hosts Bucks were unable to shake a common issue from the regular season — coming out and playing well in the third quarter.

Buchanan trailed Three Rivers 22-15 at halftime, but could not match the Wildcats’ intensity in the third quarter, and wound up being eliminated 53-25 in the opening round of district play.

The Bucks finish the year 15-6. In five of those six losses, Buchanan played well during the first 16 minutes, but came out flat in the third quarter and let games get away from it.

“We do a lot better job executing on defense when we are right in front of our bench,” said Buchanan coach Gabe Miller. “It is that second half when we go to that other end that we let a couple of their [Three Rivers] shooters loose and had a little trouble breaking the press the way we are supposed to. Before you know it, there are a couple of turnovers, and you are chasing 10 [points]. That has kind of been the story of the year. We lost six games and five of them have been similar to how the third and fourth quarter played out.”

Three Rivers, co-champions of the Wolverine Conference South Division, were cold from the field in the first half, but managed to string together enough points and force enough turnovers to lead 14-8 after one quarter and by seven points at the break.

That changed in the second half as the Wildcats got hot from the field and Buchanan was unable to get into an offensive rhythm.

As a result, Three Rivers opened up a 41-19 lead heading into the final eight minutes of the contest.

Kali Heivilin and Hadley Miller both finished with 13 points to lead the Wildcats.

Emma Lozmack and Hailey Jonatzke each had seven points for the Bucks. Buchanan’s leading scorer, Faith Carson, had just five points, well behind her regular-season average of 14.8 points per game.

Although the loss hurts at the moment, better days appear to be ahead of the Bucks, as Lozmack was the lone senior. Buchanan had six juniors, three sophomores and two freshmen on its roster Monday night.

“As a young team, that is something we are going to have to figure out as we move forward,” Miller said of playing a full 32 minutes. “We have to look at the big picture. Ideally, kind of looking at the district, last year’s would have been a bit more favorable to us. The Eddies, Three Rivers and Niles are all capable of winning this district. Edwardsburg and Three Rivers are regional caliber teams. It was a good experience for our girls and gives them a chance to see what they need to work on. Hopefully, it will make us better in the long run.”