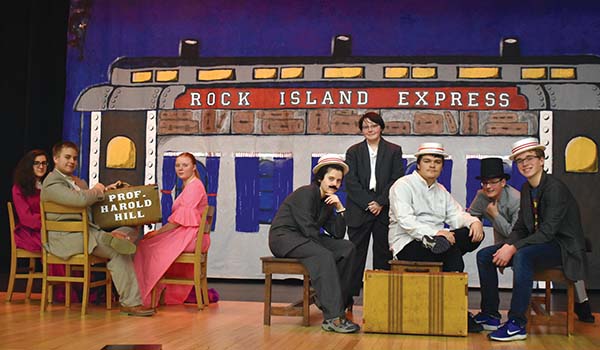 But do they know those off of center stage?

What about the stage crew that moves train backdrops and homey town facades to mimic conman Harold Hill’s arrival to River City, Iowa? Or the sound technician that allows Hill to project band equipment pitches to unwary residents? Or the pit band trombonists that play “Seventy-Six Trombones” as Hill leads the band he hopes to scam?

Nearly 50 students and adults make the musical possible not by acting, but by ensuring the show can go on.

Seniors Lexie Ingdahl, Brendan Miller and Jacob Thacker all rose through ranks of stage crew over the years of Niles plays and musicals. Now, for their final shows, they are in leadership roles — Ingdahl as assistant stage manager, Miller as sound technician and Thacker as stage manager.

The trio have stuck with stage management because of the support roles they offer and the work they do.

“It’s nice knowing how to do other stuff, like the behind-the-scenes stuff, instead of actually being in it and memorizing,” Thacker said.

While Niles students perform March 7 and 8, the group will be hard at work, too. Ingdahl will manage set-movers behind the stage, sending them out in dark gear between scenes.

Miller will activate, deactivate and manage volume control of about 20 microphones as actors speak and disappear behind the curtain.

Thacker will manage them and others from his balcony perch, headset on, script in hand, giving cues to take action at specific scenes.

An uptick in mics and sets will make all three of their roles more challenging than in past performances, they said. That makes communication between each other and the actors all the more important.

“As long as the cast is collaborating and listening with us, it’s fine, it’s easy,” Thacker said.

Stage crew adviser Robert Babler said that when the first performance comes around, he will take a passive role in helping his students out. They are great at what they do, he said.

“That’s really the goal in this. When I’m in the way, that means that they know what they’re doing,” he said.

Earlier this semester, the stage crew for “Peter Pan,” of which Ingdahl, Miller and Thacker were part of, received recognition at a Niles Community Schools board meeting for their work.

New music tradition in the making

During a Wednesday rehearsal, as the stage’s faux train came to a halt, the pit band’s brass made a blaring whistle sound. Moments later, they broke out into a song to cover a scene change.

Later on, they would take on well-known songs of “The Music Man,” such as “Seventy-Six Trombones,” “Madame Librarian” and “Shipoopi.”

The Niles pit band experience is new to many members, the school’s new band directors included. Connie Wicklund plays the flute, her assistant Nick Kramer layers the bass and 19 other adults and students fill out the rest of the woodwinds, brass and percussion.

This is the first year in recent history that students have been pit band members. Many are in Wicklund’s and Kramer’s concert band.

“It’s harder. It’s faster, which is something we’re not used to. It’s very easy to get lost,” said Maiya Warren, a sophomore trumpeter, in relation to her band class’ music.

Rather than the band being the center of the music and the audience’s attention, it is the backdrop, following the lead of singing actors and scenes on stage.

Rather than having a full section of people playing a particular instrument, students perform alone or in a small section, making playing more independent.

Wicklund said these realities make pit band more difficult than concert band, especially because they recently switched from practicing independently to performing with the cast during rehearsal.

“It feels easier playing with them, though, due to the fact that they’re all actually playing their part in their role in the play,” Podlin said of his acting peers. “We can go along easily, just listening to when we go in for the music.”

Podlin and his peers will read their sheet music, watch the stage and watch the musical’s director, choral teacher Matthew Hunckler, as he conducts them through cues and songs.

It is an experience the trio of musicians has enjoyed and would be willing to do again.

Tickets for “The Music Man” can be purchased at Niles High School for $5 or at the door for $7.