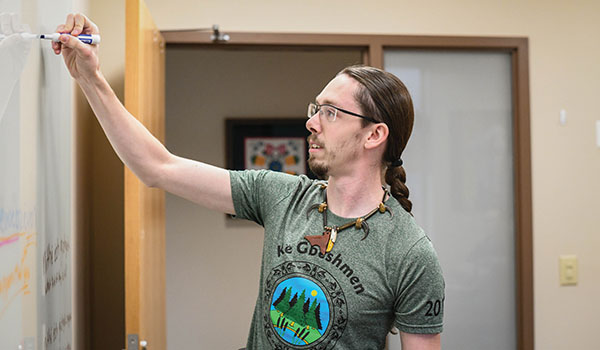 A decade ago, Pokagon Band of Potawatomi Language Specialist Carla Collins, 44, could not string together a full sentence in her native language.

Aside from a few words — such as bozho (hello) or migwėtth (thank you) — the Potawatomi language last spoken by her grandmother was largely lost to her, something she said left a void in her heart.

“I think just about every native person wishes they knew their language, wishes they could speak their language,” Collins said, her hands nervously curled around a coffee cup. “It’s something that is attached to us that we don’t have anymore.”

Collins was not alone. The language was lost to all but a handful of citizens, and the Pokagon Band had little in the way of programming to keep the language alive. However, that is changing.

In recent years, the Pokagon Band has made investments into language revitalization efforts through its language program. Dozens of language classes are being offered at Pokagon offices across Michiana. Children are being taught from a young age through Zagbëgon Academy, a preschool the Band opened in 2018. The department’s newest effort came in November of last year when it launched a smart-phone app with Mango Languages that teaches the Potawatomi language. It progresses from simple phrases to more complex sentence structures and vocabulary.

Now, Collins is a member of a small team leading those language efforts.

“We’ve come a long way,” Collins said, writing out a list of native words on a whiteboard inside of the Band’s Dowagiac Language and Culture building. One of the words is Bodéwadmi — the one who keeps fire — the native name for her people, Potawatomi. 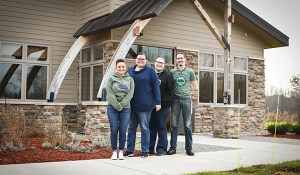 From left, Rhonda Purcell, Carla Collins, Margaret Long and Kyle Malott are dedicated to preserving the Potawatomi language. The four are pictured outside the Pokagon Band of Potawatomi’s Language and Culture Building in Dowagiac.

Today, the Potawatomi language is considered critically endangered, with fewer than 10 fluent speakers still alive, most of whom are spread out across the Midwest.

Things were not always this way. The Columbia Encyclopedia estimates there were more than 15 million speakers of more than 2,000 indigenous languages in the Western Hemisphere in the 1400s. Just two generations ago, native languages were spoken in the home by a majority of speakers, passed down from father to son, mother to daughter.

Experts with the Pokagon Band have pointed to government policies and boarding schools beginning in the 1800s designed to assimilate Native Americans and remove Native American culture as one of the primary causes of native language decline.

“They had to choose: do we be Indian, or do we keep our children safe? A lot of them chose to keep their kids safe and not even speak the language in their own homes,” said Pokagon Band Language Coordinator Rhonda Purcell. “[Those policies] have had a lasting, generational impact of trauma.”

It was not until the Native American Languages Act of 1990 was passed that it became a matter of policy for Native Americans to be able to use and promote their languages in public settings.

Now, Purcell, Collins and fellow language specialist Kyle Malott believe that the Pokagon Band’s language revitalization efforts can help bring healing to those who had their language stripped from them.

“We are in a time when we know we can reclaim our Bodéwadmi identity and our sound without consequences,” Purcell, 34, said. “People fought for us to have these rights — to practice our spirituality, to maintain our own constitutional government, to speak our language. The people who fought for that, it is our responsibility to show that we care. That’s why we were called to do this work. It is our way of giving back to the community to ensure that all of that was not for nothing.”

The Band’s efforts to revitalize the Potawatomi language for its citizens began in earnest in 2013 after Collins and Malott, 29, were chosen to study the language.

After attending classes hosted by the Band and a summer camp dedicated to Potawatomi language, Collins realized she took to the language well, unlike many others she saw who struggled to learn the language. The Potawatomi language is notoriously difficult to learn, with some verbs having up to 70 variants depending on the subject and tense.

“I figured, ‘oh, I want to do this,’” Collins recalled as she sat inside the building where she now works to preserve the Potawatomi language as a full-time job. “I realized I could do it if I worked hard at it.”

“There is a void. Everybody wants to know their language,” Collins said. “They want to feel like a full, whole person, and I think a lot of our native people feel like there is a little piece missing. If they could relearn their language, they would have that tie back to their family members that had passed away. It would fill that void.”

“Without our language, we can’t call ourselves Potawatomi. Language and culture — you can’t have one without the other,” Malott added.

Malott, Collins and Purcell all described their work as rewarding but draining. As language revitalizers, they have to wear many hats — teacher, tech programmer, even sometimes psychologist — and there are few roadmaps of success for them to follow.

All three admitted to sometimes getting in a “doom and gloom” mindset about the realities of bringing back the Potawatomi language. When that happens, Collins said they have to come up with ways to motivate themselves.

Children are the future

One of the most recent successes that gave Purcell hope took place at Zagbëgon, the Band’s alternative preschool facility for tribal children that is focused on Potawatomi culture, language and lifeways.

Last Halloween, Purcell sat in the back of a heavily decorated classroom, cobwebs and other spooky decorations covering the walls around her. Though she was keeping to herself, performing a routine classroom observation, it did not take long for a 3-year-old, briery-haired blond student to approach her.

“What is that?” the boy asked, his finger pointed in the air toward a small, plastic spider dangling from the ceiling.

“Ki Wigés,” the student responded, meaning “you did good.”

“He said that to me!” she exclaimed, seemingly still in disbelief. “For him to congratulate me as an adult, and for him to know that, something is being done right here. I was so touched that he praised me in our language. I thought that was monumental.”

That student is one of more than 30 students who learn basic Potawatomi language as part of their daily curriculum at Zagbëgon. Purcell said in the time since its founding, Zagbëgon has proven successful in teaching young children the language and kickstarting interest in Pokagon culture.

“We can’t guarantee what learning happens once they leave that classroom, but we can be sure we are giving them a good foundation while they are young,” Purcell said. “We’ve seen that it’s really the young children that soak up [language] like a sponge.”

The preschool is not just inspiring children.

Margaret Long, 30, is one of two new language apprentices added to the Band’s staff, learning under Collins and Malott. Having been with the language revitalization program since July 2019, she first became interested in the topic after working at the preschool and using Potawatomi words daily with the students.

Already, Long said, she has begun to share that love of her ancestral language with her children. Her 11-year-old son, who previously wanted to be a U.S. Marshal when he was older, now wants to work in language preservation. Her 3-year-old daughter, who often struggles to be understood in English, has little problem getting her point across when speaking Potawatomi.

Stories like Long and her children’s give those involved with the Pokagon language program hope that their strategy of teaching native children the language young will help preserve it.

Eventually, Collins, Purcell and Malott want to see the Pokagon Band extend its education efforts past the preschool level to offer a K through 12 immersion school to provide supports to continue children’s learning throughout their entire education. Though Purcell could not say when the Pokagon Band might see an immersion school added to its Dowagiac campus, she hopes it will occur within the next 10 years.

“It’s cliché to say, but children really are the future here,” Purcell said.

The future of the Potawatomi language

For the time being, Purcell said the language program will continue to do what it has been doing to increase awareness of Potawatomi revitalization while still seeking out opportunities to grow its programming through Pokagon Band funding and grants.

Until more programs are established, she said the number one thing an average Pokagon citizen can do to help bring back the language from the brink of extinction is to make a dedicated effort to learn it.

“Learn outside the classroom,” Purcell said. “Stop closing your notebooks and leaving them until the next week. You have to continue that learning when it is most successful, which is outside of the classroom, so that you can then apply it to your everyday life.”

No matter what happens next, those involved in the Pokagon Band’s language program know that bringing back Potawatomi will be a generations-long process.

“It took the government 50 years to eradicate our language through force and abuse, so we can’t do a whole lot in a year,” Collins said. “It’s going to take us the rest of our lives to create speakers.”

Despite this, they have hope that there will be a day when, just like a few generations ago, Pokagon citizens will be sitting around the dinner table, sharing stories and asking to pass the meal — all while speaking Potawatomi.

“I have hope, because the generation before us, there was no language program,” Purcell said. “I was the first employee in the language program, and now it has grown to five people, so there is support. I think we are creating as good a foundation as we can with the resources we have, and we have opportunities and possibilities to really do something. Then, it will be the next generation’s responsibility.”