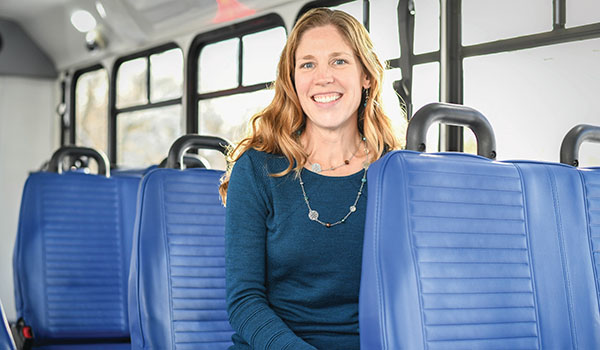 The bright blue garage of New Heights Auto Services on M-139, oddly, is easy to miss. Hundreds of drivers likely do so each day on the main thoroughfare between southeast and northwest Berrien County, intent on going to work, a doctor’s appointment, a store, attractions or home.

So, too, is a small brick schoolhouse converted into a resource center in a neighborhood outside of downtown Niles. Rather than knowing what happens inside, drivers may associate the structure with a place where people walk, bike or push shopping carts up to.

Even a bus center in Niles is easy to miss. Eyes going by at 25 miles an hour may instead latch onto public artwork or a public housing complex nearby rather than the service that transports people to important destinations. 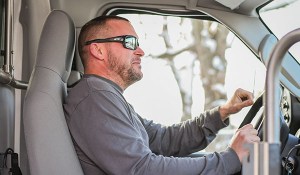 Each service is part of a larger piece of public transportation in Berrien County, and each offers its own approach to providing the means to bring people to resources.

He acknowledged that slow, incremental change was occurring to expand services to meet needs.

Fixed route stops, Smith said, are at places where employment is high, such as Whirlpool Corporation or Andrews University, or where resources can be provided, such as grocery stores and government buildings.

Demand-response services, where transportation is scheduled with users, are in more rural areas.

The plan is 10 years in the making. In that time, the county and public transit leaders conducted public studies to find where transportation is needed most and why it is needed. The research showed employment was the greatest need, and transportation was its biggest barrier.

Chris Britton, New Heights Auto Services director, said jobs are open and there are people to fill them, but connecting the two is where the difficulty lies.

Britton was in Berrien County a decade ago, when the county began taking a holistic approach to public transportation. He said there has not been much progress since, and that is affecting people. 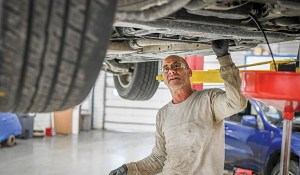 Pat Winans is a volunteer with New Heights Auto Services.

In New Heights’ auto shop — 4367 M-139, St. Joseph — two mechanics work under two lifts, one holding a small car, the other an SUV. An occasional laugh rises between above the whirls and taps.

The shop is part ministry, part retail store. The small car is receiving general maintenance, and its owner is paying for it.

The SUV was donated and is being repaired at the shop. Once completed, it will be sold to an individual in need who has passed financial coaching sessions in payments totaling $500.

Britton expanded the auto service into its current 7,000-foot space to impact more people, some of whom he said may work, but may not make enough to have reliable transportation to get there.

“It is absolutely insane to think there are people with a job that are on the verge of losing that job and sliding backwards,” he said. “That’s what keeps me up at night.”

Without it, she said she would have a long walk ahead of her each day. She said the service was reliable and staffed with “amazing” bus drivers. All she could ask for is extended hours so she could work later into the evening.

Carter’s insights are common responses from Niles DART riders, from those who use it for school trips to those who use it to visit relatives, said Kelly Getman-Dissette, the fleet’s manager.

Getman-Dissette worked with Smith in developing the pilot program’s studies.

“I think it really highlighted the need for public transit services in this county, and it highlighted some of the areas where we can do more to better connections with the other agencies or just to different destinations,” she said.

One of those areas, largely specific to Niles, was connecting a Berrien County transportation route to a South Bend area route. That, Getman-Dissette said, would open up more employment, shopping and medical services to Niles area residents.

When the Niles DART bus driver picks up Carter from her home, it takes her to Ferry Street Resource Center, 610 Ferry St., Niles. The former brick schoolhouse is now where people from groups such as Jobs for Life, Emergency Assistance Services, Friend of the Court and Department of Health and Human Services will appear and provide their services for free.

If Niles DART moves people to a resource, and New Heights provides the vehicle to reach a resource, Ferry Street Resource Center transports the resources to the people.

Director Ric Pawloski said transportation is a barrier for almost everyone he works with. Some walk from Niles to Buchanan to work. Others have vehicles but cannot afford tune-ups and are left to the whims of their cars working properly any given day.

Ferry Street’s mission is to create sustainable futures for its clients, but Pawloski said transportation needs impede on its mission.

Neither Pawloski, Britton or Smith said their solutions, nor the others, were a cure-all.

Rather, Pawloski and Britton said that their services would fill some gaps in Berrien County while its government sought to bring public transit entities together and expand services. Planned coordination between entities like theirs is meant to provide more services to more people.

Smith said public transit was not going to help everyone, either — Berrien County is vehicle-oriented, with its dotting of cities and villages interspersed with rural farms and urban sprawl.

Rather, collaboration is key, all three men said.

“The need for transportation is certainly there,” Smith said. “I think everyone understands that.”

No one with a vehicle perhaps can understand that need more than those without them.

“They’ve got places to go and things to do,” said “seasoned veteran” Niles DART bus driver Kathy Johnson as she pulled into a driveway, preparing to take someone to work.