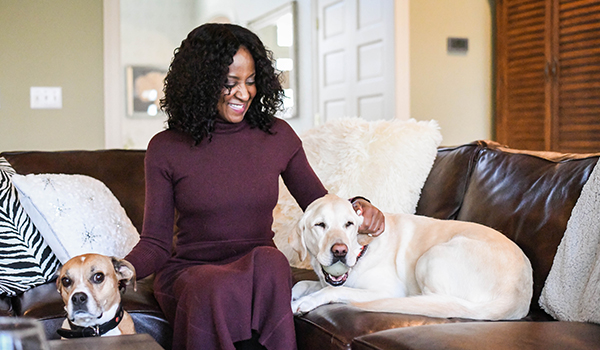 On Jan. 24, Niles-based fitness coach Frances Shavers did something she had never done before. She sat in her bathroom, took off her wig and snapped a photo.

Roughly six weeks before, she had received a stem cell treatment, and ever since, she said she was working to “get up and make the most out of whatever the day brings.” That day, making the most out of things meant hitting the post button on her phone and sharing a photo of her wigless with thousands of people across the world.

“I wanted people to know I was growing my hair out, and it was funny to me,” Shavers, 52, said with a laugh. “It was kind of a way for me to offer something more real to social media and something important to me.”

With nearly 8,000 Instagram followers and more than 2,500 Facebook friends, social media is a regular part of Shavers’ life. She uses her online platform to both grow her fitness coach business and to share her journey as a woman living with multiple sclerosis and trigeminal neuralgia, both of which leave her with chronic, debilitating pain.

As of 2019, Facebook alone had 2.4 billion users worldwide. While many have criticized the rise of social media usage, for Shavers, it has been a blessing, allowing her to create a community surrounding health and to raise awareness surrounding her rare conditions.

“When I was first diagnosed, I felt so alone, and for a long time, I was trying to hide my condition,” Shavers recalled as she sat at her dining room table, her service dog, Hannah, never straying far from her side. “Eventually, I decided this is who I am. This is it, and I don’t want other people who may be going through this to feel the same way that I felt. I decided to tell my story to help someone else live their story.”

Shavers has always been described as determined. It was determination that got her through her undergrad at the University of Notre Dame and master’s and doctorate programs at Harvard University. She met her husband of six years, George, after determining she was ready for a life partner and asking a friend to set her up on a blind date. So, when she had to leave her job at Notre Dame due to her TN and MS, she was still determined to work, which is how she ended up in the fitness coach field.

“When I got sick, I had to leave my job, and I can’t drive. I had to figure out what I could do from home,” she recalled. “I might not have been able to do X, Y, Z anymore, but I needed to figure out something I could do in my new life, my new reality. That’s how I came to fitness coaching because I can do it largely at home, and it speaks clearly to something that I love and believe in.”

As a fitness coach, Shavers meets with clients and discusses their fitness goals before preparing a workout regimen for them geared to their fitness level and aspirations. As her clients begin their fitness journey, Shavers will check in with them to see how they are doing, offer encouragement and make adjustments where needed. Though she worked in higher education for more than 20 years, Shavers always considered fitness to be her “side hustle.” So when she needed to make a change due to her health, fitness seemed like the right fit for her.

“With a fitness coach, you are not alone. There is someone there with you for the express purpose of supporting you,” Shavers said, explaining the benefits of using a fitness coach. “It’s also a lot more fun this way and, hopefully, helps you get to your goals faster and easier.”

It was because of her business that she was drawn to social media, as she used Instagram and Facebook to promote and advertise her business.

“Social media empowers the business owner to do something on there that seems accessible,” she said. “You can just go online and share your product with the world.”

It would not be until later that her social media presence would grow and evolve into what it is today — a community where she shares her struggles and triumphs, primarily surrounding her health, and helps others feel less alone.

“I deliberately set out to grow my business, and then it just sort of happened,” Shavers said. “Now, I post a lot of things that have nothing to do with my business. I share my joys and my struggles and my life.”

In 2010, Shavers was diagnosed with multiple sclerosis, a disease in which the immune system eats away at the protective covering of the nerves, and trigeminal neuralgia, a chronic pain condition affecting the trigeminal nerve in the face. The symptoms of her TN come in the form of sharp, stabbing pains that shoot through her head and last up to 30 seconds. Once a TN attack begins, the shocks come in two-minute intervals and can last for hours. TN has been nicknamed “the suicide disease” as patients sometimes kill themselves to end their suffering, according to the Duke University School of Medicine.

Since her diagnosis, Shavers has undergone six brain surgeries and traveled the world seeking treatments for her TN. However, so far, no treatment has had a significant, lasting effect, and with fewer than 20,000 cases per year, Shavers began to feel alone in her condition.

“It’s not a headache; it’s not a migraine. It’s more like an electric shock,” Shavers said, as she held her head to the side, hoping to ward off an oncoming attack. “It’s affected every area of my life in some way or another. They can come just out of the blue. We don’t know when they will happen.”

When Shavers makes a post on Facebook or Instagram, she tries not to shy away from her painful reality. While Shavers considers herself a positive person and her feed is filled with cute anniversary posts with her husband and smiling pictures of her enjoying herself post-workout, she believes it is essential to be fully genuine online, which to her, means sharing her vulnerabilities and rough days. Saying she likes to leave all her emotions on the table, there is no topic that she will not discuss on social media.

Shavers said it was her willingness to be vulnerable online that helped her to create the community of positive users on her profiles. Ever since she began sharing her health story on social media, she has received an outpouring of support from people across the world.

“It’s very touching to have that support,” Shaver said, holding back tears. “I don’t get to respond to all the comments, but I read each one of them, and I’m very grateful.”

As both a social media follower and personal friend of Shavers’, Charmelle Greene said the person Shavers is online is identical to the person she is in real life.

“She is such a genuine person, and I believe her situation allows her to open up in a way she hasn’t in the past,” Greene, who previously worked at Notre Dame with Shavers, said. “What I see [online] is exactly who Frances is. I just think that she developed her voice in a way that connects with so many people on a deeper level.”

Even if she was not close, personal friends with Shavers, Greene said she would be inspired by her story and the way she shares it online. In fact, Greene believes Shavers could encourage anyone. Her belief was borne out when she organized a Go Fund Me to raise $35,000 to get Shavers stem cell treatments. The goal was exceeded by more than $6,000 coming from more than 150 donors across the U.S. and beyond.

“She is an inspiration, highly intelligent, and she can get you to do anything,” Greene said. “Her influence is so strong; you feel this connection and desire to do more. You feel you can accomplish so much. She motivates people to strive for greatness.”

The future of social media

In 2020, Shavers has two goals: to get healthy and to grow the social media community that has been so supportive of her. While she has to leave her neurological health in the hands of doctors, Shavers is currently brainstorming ways to make her second goal a reality. She hopes that through social media, she can encourage others to share their stories of personal struggles.

“Anyone who says I inspire them, they inspire me as much if not more,” Shavers said. “I want to create a space where people can come out of the dark and share and not have to feel like they are alone. That’s just something I would really like to do — create a community of support, encouragement, love, compassion, empathy.”

Until she can come up with a fully-formed plan of how to implement that, Shavers said she would continue to share her journey on Facebook and Instagram — and eventually, whatever social media platform overtakes those.

“Social media is a tool I figure I’ll keep using for a lifetime,” she said.