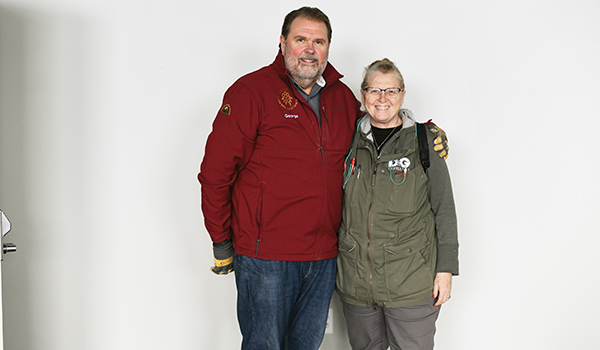 Denise and George Lynch are the owners of Green Stem, LLC, which is now open on S. 11th Street in Niles.

On a chilly November morning, George Lynch sits on a camping chair in the bones of an auto care center.

Behind him are wooden beams, which will become the foundation for future rooms. Sometime in 2020, they will house a compliance office, a secure transport station and a display case of marijuana paraphernalia. A remnant vehicle lift station will soon become a basement stairway leading to more marijuana products.

On the other side of town sits another former business, Simplicity Pattern Company, in a defunct industrial neighborhood. Soon, Lynch will stand inside the building, overseeing not textile equipment, but marijuana plants.

Lynch is the co-owner of Green Stem, LLC, a medical marijuana growing, processing and provisioning business.

The places his business inhabits are the remains of Niles’ former industry. Green Stem, Lynch said, is in the business sector in the herald of the new. That is, as long as the budding industry can adjust to plant growth concerns and unwavering opinions on the drug.

Niles was one of the first municipalities in Michigan to embrace adult-use ­— or recreational — marijuana, opting in to allow related businesses in October 2019. The decision came as medical marijuana businesses were taking steps to open in town, many hoping to eventually take advantage of the city’s new laws.

“I believe we have more to benefit by opting in and making it more commercially available, more affordable, and hopefully discouraging the home growers and that material, which I think would be more likely to get out on the street in the black market,” said councilmember John DiCostanzo the night he cast his vote.

“If they really want it, they’re going to get it, legal or illegal,” councilmember Charlie McAfee said about adult-use users. “I would feel better to have it legally … rather than the back doorway.”

On Jan. 23, The ReLeaf Center became the first Niles business to grow, process and sell marijuana after months of licensure approval, plan approval and building renovations.

Lynch, a former Pandora Music executive, said he has invested millions of dollars and many months in his own project to eventually grow, process, provision and transport marijuana with his wife, Jane, an interior designer, and his children.

They have all relocated to Niles, bringing more employees from other states with them. They are hoping to employ many locals into what Lynch said will be well-paying jobs, too.

The Lynches said they spent hours poring over the viability of their venture, the specifics of marijuana laws locally and statewide, and the municipalities most willing to listen to a marijuana entrepreneur’s proposition. On Jane’s work desk, where her self-designed layout of Green Stem is sprawled, sits an open code compliance book lit up by highlighter lines.

Lynch said Niles, with its helpful city staff, ideal industrial space and proximity to major Midwest cities, could be a hub of the Michigan marijuana industry. Green Stem could be at its core.

That is if all goes according to plan.

“We’re very anxious to get this thing going and get up and running because we think we [have] got a lot to offer,” he said, hands in his Pandora varsity jacket pockets.

Lynch’s anxiety is both nervous excitement and worry. He is excited to provide a safe, tested product to people, whether for medicinal or recreational use. He is worried, however, that current realities across Michigan could pose challenges not only to his business, but the industry in general. He thinks the adult-use recreational market is coming too quickly.

In summer 2019, the state of Michigan surprised many by announcing it would open up adult-use marijuana licenses and sales in December. When sales began, few businesses had proper licensing.

If anything, that helped the larger marijuana industry. There were not enough plants being grown to supply non-medical buyers, Lynch said. The industry’s growers were used to about 300,000 medical patients. Many did not yet have the approval to grow for non-medicinal use.

Yet, the first week of sales Dec. 1 to 8 totaled $1.63 million, according to the Detroit Free Press. The five shops open tended to run low on their limited supply of goods quickly.

According to the Michigan House Fiscal Agency, once the adult-use market is fully established after 2020, annual sales could near $950 million.

While not official, Lynch shared his insights on the potential the market has from being in the market itself.

“The word on the street is that it’s going to be more like 3 million, 3 million regular adult-use customers, and that doesn’t include the 25 million that come up here between Memorial Day and Labor Day for vacations,” Lynch said. “The volume of sales for recreational adult-use is going to be astronomical.”

In November 2019, though, Lynch was not too worried about this prospect for his own business.

Instead, he was worried about banking.

Robin Schneider, executive director of the Michigan Cannabis Industry Association in Lansing, said banks have to comply by federal laws, which still prohibit the sale of marijuana products. That, along with the still-taboo nature of marijuana as a detrimental drug, has made it difficult for many marijuana businesses to find someone to create an account or take out a loan with.

Without a bank, businesses would have to resort to a cash-only enterprise, storing their money in their own personal safes.

“When we first launched, most of our members didn’t even have a bank to house their money,” Schneider said. “We’ve been very successful at working with banks and carrying them with our members geographically around the state.”

Schneider said her association has been working hard to provide resources to its members, including human resource assistance, best manufacturing practices, regulatory compliance and insurance information.

Good banks and resources will be important for entrepreneurs in business types introduced with adult-use rules in summer 2019. These include microbusinesses, event organizers and designated consumption centers. These business types will need less capital and thus be more accessible to less wealthy entrepreneurs.

Niles was also one of 19 cities in the state whose state license applicants can receive discounts for minimum five-year residents, especially those who have prior marijuana convictions.

It remains to be seen whether Niles will approve any lower-capital entrepreneurs. As of now, many of those approved through the medical marijuana process have large amounts of capital, some in the millions.

“What I always say to our members is, ‘You absolutely cannot enter into this industry without paying homage to the social justice industry that got us here,”’ Schneider said. “So, our members are very conscientious of supporting reforms such as expungement, and we’re happy that our members are helping to fund some of that work.” 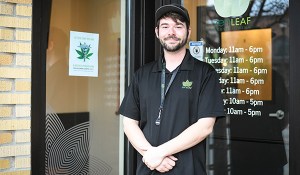 Nick Modica is the General Manager of Zen Leaf, a medical marijuana dispensary in downtown Buchanan.

Despite tough business realities to work through — product levels, banking, inclusivity — Lynch and Schneider both said the state and city has done a great job at regulating marijuana businesses to ensure safety, quality and care.

Lynch said Green Stem prides itself on its level of safety and security. At Niles City Council meetings, the Lynches often spoke about the dangers of chemicals from self-growers, unregulated business and gas station vape products.

A 15-minute drive northwest from Green Stem is another medical marijuana company that values safety and security: Zen Leaf.

The Buchanan medical marijuana provisioner opened its doors in May 2019 at 259 W. Front St., the first in the area to do so. Like Green Stem, Zen Leaf found an accommodating community and a great opportunity in a southwest Michigan city, said marketing and public relations employee David Spreckman.

The business values safety and security because Zen Leaf runs as a branch of healthcare, Spreckman said. Its employees work as collaborative consultants to ensure their patients receive the best-suited product for their ailments.

“We don’t push products,” he said. “We try to push solutions to people’s problems.”

Spreckman said that business is strong. People come from nearly 50 miles away.

While the Zen Leaf employee could not say whether his business would seek an adult-use license like Green Stem plans to, the business may be unable to anyways. Buchanan has not made operating adult-use businesses legal.

Lynch estimates that about 25 percent of his revenue will come from medical card holders if Green Stem receives an adult-use license. It cannot survive without it, he said.

As for Zen Leaf? Spreckman did not seem concerned.

“It doesn’t change our approach,” he said. “We’ll always treat every person with the same level of care, whether they’re a patient or an adult.”

Like all other marijuana businesses, Zen Leaf will have to wait to find out its future.

The weeks leading up to November 2019, a buzz of busy energy pushed the staff and administrators at the Cassopolis... read more