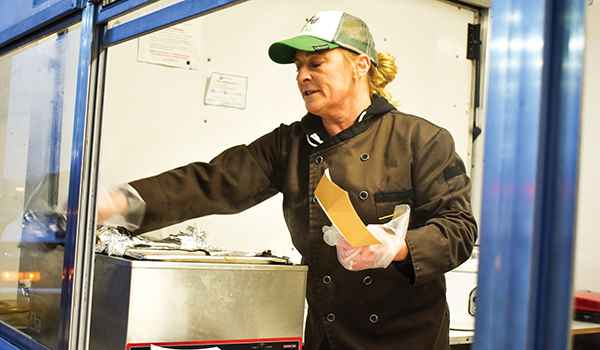 Lisa Hines is the owner of Keenan's With a Kick.

No matter where Edwardsburg resident Lisa Hines has called home, there has been one thing that has been a constant in her life. The love of cooking.

That love of cooking has led her to a career in the food truck industry with Keenan’s With A Kick, where she provides authentic Cajun cuisine for her growing number of customers, who are willing to travel wherever she may have the truck set up.

Hines is originally from Elkhart, Indiana, but moved Louisiana for a job. She had to come home when her father became ill. He would eventually die of lung cancer, leaving Hines jobless and homeless.

She took the only thing she had, a sailboat, to Lake Monroe and lived on it 12 months out of the year. 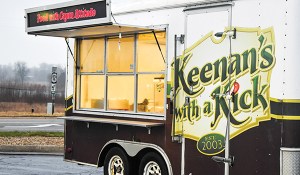 So, where did she get the idea to get into the food industry? It came from a friend of hers, who was her father’s neighbor. She would go there to regroup, and they began talking about opening up a hot dog stand.

“We talked about selling hot dogs out of a food truck,” she said. “Dad passed away, and we went our separate ways. I read a book about food concessions to see if it was something I could do. The rest is history.”

Hines said she chose a truck over a brick and mortar store for several reasons, the biggest of which was cost. Creating a mobile business also enabled her to start serving food faster than she would have been allowed to if she had bought a storefront.

According to “Food Trucker,” a website dedicated to the industry, while restaurants continue to open at a yearly rate of 2 percent, the food truck industry is blowing up to the tune of 7.9 percent over the past five years.

There are certainly hurdles that must be cleared just like any other business. Making wise decisions early on can pay big dividends down the road, like what type of food truck an owner wants and can afford.

“The reason why I chose a wagon over a truck was if the engine breaks down on your truck, you are not going anywhere,” Hines said. “If my truck breaks down, I can get another one, hook it up to the wagon, and I am back in business.”

Keenan’s With A Kick was established in 2003. Hines would later purchase the wagon from a retired neurologist who now lives in Dublin, Ireland.

“He probably loved me more than I loved myself,” Hines said. “He is also probably one of the reasons I am still alive. I told him about my little idea and wrote up a proposal and went to him. He helped me start this business.”

Once the wagon was secured, Hines shifted focus to perfecting a menu that would offer a different kind of food than most people are accustomed to finding on wheels.

“Food trucks that are like mine, because I am more about the flavor and I enjoy coming in and cooking every day, provide people with good food that is fresh,” she said. “Like at fairs, those people do it for the money. There is a lot of preservative stuff there, so that is why I stay away from fairs. I have good food, and I get to cook for people.” 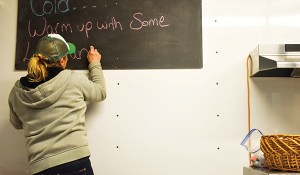 Hines believes that television and cooking shows have contributed to the rise of food trucks, and will continue to do so.

“For people with the passion, it is low overhead,” she said. “The reason I did it is because my husband and I raised our grandson. He traveled all over the state of Indiana in his playpen while we served up food.”

Hines also believes that food trucks have a real future for a couple of reasons. One is that customers get to know the people serving them their food and can interact with them.

Then there is the fresh-food element.

“People love going to the fairs because they love the food,” she said. “So, it is like having a fair all year long. More and more people are looking to eat healthy. They want to eat more farm to table.”

Another key to a successful food truck is adding a twist to dishes.

“I am doing my take on a po’ boy,” Hines said. “It is my take on jambalaya. We add all that love into the food. The corporations and fast-food places cannot do that.”

Hines said she will continue to take her food on the road.

“I love people eating my food,” she said. “For me, being able to do this is a dream come true.”

A reality hit Sylvia Holloman hard. It was 2005, and she had just finished writing her first romance novel, “Opening... read more