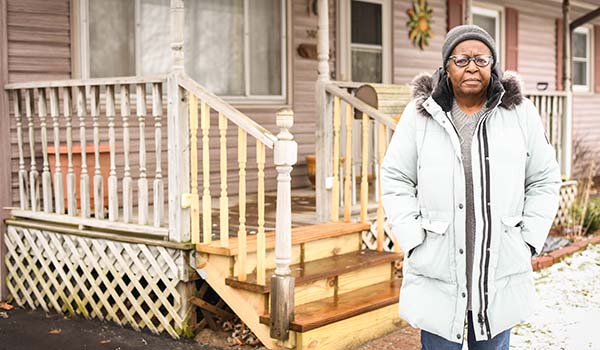 Rita Holloway was able to make improvements to her home thanks to a Dowagiac grant.

Rita Holloway grew up in Chicago surrounded by dirt, glass and weeds. Despite that landscape, as a child, she loved flowers.

Now at 74, she still has an eye for beautifying her surroundings by watching her flowers grow. Only this time, with a goal to beautify her home on Grove Street, she was granted assistance for several projects through the city of Dowagiac.

The city of Dowagiac received a $50,000 grant from Michigan State Housing Development Authority on June 19. The grant money was used for home improvement projects to enhance curb appeal and neighborhood appeal. The city of Dowagiac earned the grant because of its conformity to income limits and chose to divide the grant into $5,000 increments to be used on 10 separate homes, including Holloway’s home, according to Assistant City Manager Natalie Dean.

To qualify for the projects, residents had to own their own home, live within the city limits and be caught up on taxes.

The NEP grant coincides with the city’s master plan and housing initiative both aimed at improving housing in the area.

“We want to talk about how the quality of life in Dowagiac here is great, but it’s also tied into the places that we live,” Dean said.

When the Neighborhood enhancement grant was first announced, Dean was told she would probably have to go out and find people seeking visual improvements. However, that was not the case.

“People came knocking on the door,” she said. “There’s no reason why a person who has invested their lives here shouldn’t have a little hand up to get things the way they want.” 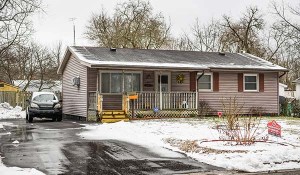 Holloway has lived in her home on Grove Street since 1978. The home was first owned by Holloway’s sister-in-law, who eventually moved to California, leaving Holloway and her husband to take over ownership of the property.

“After I moved here, I started to think about how I could make this house a little bit better by starting to do some gardening and trying to keep the grass up,” she said. “My husband took care of the grass. I just took care of the planting bushes and flowers. Most of my work was in the backyard.”

In 2010, after 19 years of working as a teacher’s aide with Lewis Cass Intermediate School District, Holloway retired to take care of her husband who had grown sick. The following year, he died, leaving Holloway with the responsibility of keeping the house going.

The years have been hard on certain areas of Holloway’s home. Her driveway had weeds growing through the cracks. In the winters, the potholes and a specific dent posed challenges after Holloway’s two knee surgeries. Her back patio had boards deteriorating, and her front porch had railings breaking off. It barely stood steady when Holloway would make her way down the steps.

“I don’t care how nice I would have my landscaping, but the driveway didn’t bring it out,” Holloway said from the foot of her front porch.

During the summer of 2019, a neighbor passing Holloway’s house approached her with a newspaper article discussing the Neighborhood Enhancement Grant. She recommended Holloway as the perfect person for the grant as she could always be seen working outside in her front yard. Holloway took the plunge and applied for the grant.

After being notified as a selected resident, Holloway was ecstatic.

“It was just unbelievable when I got the call,” she said. “Of all of the years I’ve lived here, all I’ve ever wanted was to be surrounded by a nice area where I can say, ‘This is what it’s all about.’”

The enhancements, including new porch railings, a paved driveway and five new wooden boards on her back patio might sound small on paper, but they brought impactful changes to Holloway’s home. Before the repairs, when it would rain, water would run down the cracked and pothole covered driveway into Holloway’s basement. City workers slanted her new driveway so when it does rain, water rolls into her backyard.

Receiving the grant meant someone recognized Holloway’s efforts to make everything at her home on Grove Street presentable. The home holds much of Holloway’s family history and is the reason she has chosen to stay in Dowagiac and not move closer to her grown children.

“What’s kept me here is the fact that the people that I lived around, I’ve known them almost as long as I’ve lived here,” Holloway said. “Even though some of the parents have passed away, their children still live here. We kind of look out for each other.”

Holloway’s home is rooted in family memories. She got married to her husband in 1983 and they lived together in her home for the entirety of their marriage. In 1982, Holloway also had two daughters die in a car accident, and the home keeps their memory alive.

“The fact that I’ve lived here, my girls are buried here. I just like being here,” she said.

From her home on Grove Street, Holloway can visit the cemetery, put flowers out, and feel a sense of familiarity in Dowagiac.

The Chicago girl who once grew up around dirt, weeds and glass, spends her life now surrounded by hostas, a redbud tree gifted from a coworker and other plants in her backyard sanctuary.

“I used to spend all day out here until my husband would call me in,” Holloway recalled as she stood on the new boards safely holding her back patio in tack. “My outside area is just my therapy.”

Cassopolis, Edwardsburg work with MSU to piece together a picture of the future

Separated by a little less than 10 miles of road along M-62, Cassopolis and Edwardsburg are two villages that have... read more