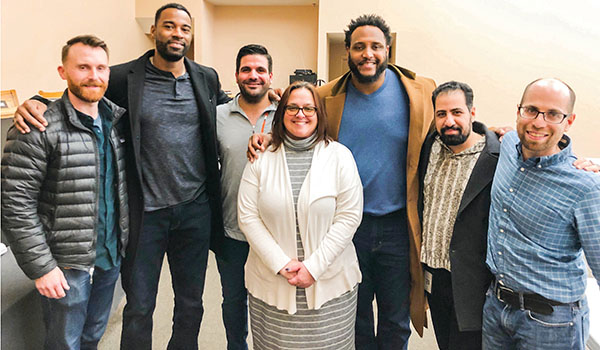 NILES — Two former Detroit Lions were subject to no pass interferences during Wednesday’s Niles Planning Commission meeting as they sought to open a medical marijuana facility in city limits.

The planning commission unanimously approved site plans for the proposed business. A public hearing on its special land use request will follow at 5:30 p.m. March 18 at the commission’s next meeting at the Niles Fire Department Complex, 1345 E. Main St.

“We’re very fortunate to be in the position that we’re in,” Sims said. “We’re looking for some opportunities. Things have blossomed with us — no pun intended.”

Johnson and Sims hope to open other medical marijuana provisioning facilities under the Primitive brand in Lansing, Washtenaw County, the Detroit metropolitan area and Kawkawlin Township, Michigan. The Lions also have ties to a grow facility in Webberville, Michigan, outside Lansing.

Sims said he and the business team have plans to include multiple plant-based products for medical use in Niles if all goes well.

The two former footballers recently partnered with the International Phytomedicines and Medical Cannabis Institute at Harvard University to study and destigmatize plant-based products as medicines. They want to place special focus on treating Chronic Traumatic Encephalopathy, or CTE, a disease that is commonly associated with head injuries from football.

“We plan on providing a nice product and also being community leaders here, just as we are in the city of Detroit, where we played football, and the other places that we’re involved [with],” Sims said.

Primitive will need approval from the Niles Planning Commission before it can start construction. A vote could occur at the commission’s April 22 meeting.

Concerns about the venture’s property stemmed not from the product it could sell, which is legal in Michigan, but the space around it.

Drivers can enter and exit the property from one driveway. Some commissioners said the corner the property was near — S. 11th and Fort streets — has high traffic. They were concerned that the new business would create more congestion if only one entrance and exit existed.

Sanya Vitale, zoning administrator and community development director, said the property is about as close to Indiana as a Niles business can be, making it the potential top pick for South Bend-area residents wishing to purchase marijuana products.

Vitale said the business made numerous calls to its neighbors to find ways to create other entrances and exits, but they were not interested.

Primitive still plans to go forward with the property if it is approved. Sidewalks would be updated and a new roof would be placed on the building at the property.

“Calvin, myself and the rest of the team really believe in putting our best foot forward,” Sims said. “We want to do it right.”

Vitale believes Primitive could be ready to open within 90 days after final approval.

If so, it would likely be the third medical marijuana provisioning center to open in Niles. Four centers are permitted.

The ReLeaf Center was the first to open. It offers adult-use marijuana products from its Niles Industrial Park space.

Green Stem Provisioning plans to open its center at 1140 S. 11th St. Monday. A public hearing for its adult-use license is scheduled for the March 18 planning commission meeting.