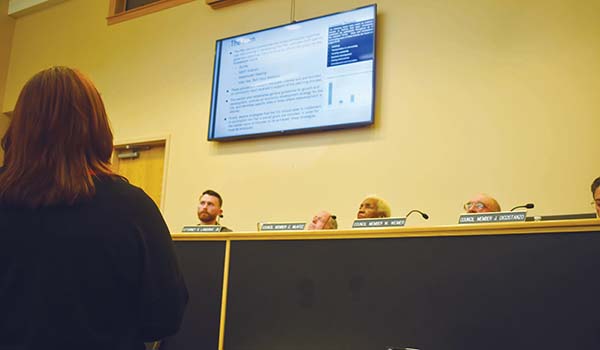 NILES — A sneak peek of the city of Niles’ vision for the future was given Monday evening at a Niles City Council committee of the whole meeting.

The current plan was approved in 2003 and has been renewed every five years since. The city designated Williams and Works, of Grand Rapids, and the Niles Planning Commission to create the 2020 plan.

The draft will be available for viewing in the coming days at nilesmi.org. The Niles Planning Commission and Niles City Council will also team up to host public input sessions in each ward of the city.

The council expects to vote on a final master plan this year.

The plan is the direction the city will take its policy to better the community over the coming years. It provides demographic and statistic information of the city, and it provides goals and development plans based on previous master plans, community input and economic realities.

A number of input and brainstorming sessions have already been completed, among them a year-long partnership with students from Niles New Tech.

“We held a number of input sessions with those students because we are planning for their futures,” Vitale said.

At Monday’s committee of the whole meeting, Vitale outlined city strengths, opportunities, weaknesses and threats, as determined by Williams and Works, the planning commission and residents.

Among the strengths were the Niles-Buchanan YMCA, Niles Community Schools and a welcoming, inclusive atmosphere.

Areas Niles could improve upon were sidewalk infrastructure, employment opportunities for young people, limited houses for purchase and landlords that maintained their properties.

Vitale said some weaknesses were already improving even as the master plan was being drafted.

“There are numerous opportunities for new businesses and entrepreneurs,” she said. “We’re starting to see a lot of growth in our downtown and our Third Street area. I’d like to think that some of those opportunities are becoming strengths at this time.”

Many of the topics residents noted during input sessions — such as walkable neighborhoods and a variety of housing options — were addressed in the draft plan’s goals.

For instance, to help with transportation and mobility, the city would determine sidewalks in high need of repair, offer more handicap-accessible spaces and strengthen partnerships with regional agencies to provide public transportation.

Overall, the city was perceived positively by stakeholders participating in input sessions. Seventy percent said Niles was better than five years ago, while nine percent said it as worse.

Many decisions made Monday evening at the Niles City Council meeting fell in line with the areas of development the draft master plan outlined.

For instance, the council approved the city’s community development department and a volunteer group to host the Niles Renaissance Faire at Plym Park. In the draft master plan, using public spaces to host public events was a goal.

Another example can be found in the master plan’s emphasis on maintaining and improving natural landscapes.

On Monday, the council agreed for the city to purchase $353,600 in wetland mitigation credits for Pucker Street Dam’s removal and the Dowagiac River’s restoration.

The credits would be used to offset ecological losses as the dam is removed and the river is prepped for its removal.

“They were not in the original plan because we had assumed and engineered the project so that there would be no reformation of wetlands,” he said.

Dunlap said he is not sure whether the project will need to be halted until make-up funds are secured. The department is currently seeking grants to make up for the unexpected cost.

Other items approved Monday were the following:

• A matching grant from the Michigan Department of Transportation to pay for road repaving on Grant and Wayne streets. The grant covers $258,942. The city will draw from its major street fund to pay for the remaining $86,314. Kalin Construction Company, of Sodus, will be contracted.

• A solar power and storage study by Fractal Energy Storage Consultants, of Austin, Texas, at the cost of $12,500.

As required by Michigan state law, Niles must have at least 15 percent of its energy generation be renewable by 2021.

• The $9,922 purchase of 138 LED lightbulbs for street lights. The lights are expected to use half the energy of the bulbs currently in place.

• Substation maintenance work by Premier Power Maintenance, of Brighton, Michigan, at the cost of $14,585.