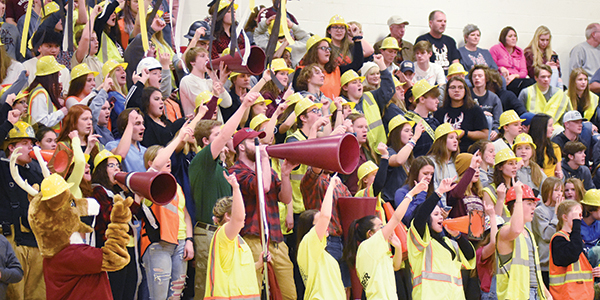 BUCHANAN — For the third time in its nine-year history, Buchanan is the winner of the Michigan High School Athletic Association’s Battle of the Fans.

“It is always surprising,” said Herd leader Morgan Struss. “I felt we had good competition this year. It is always great.”

“We all find out at the same time,” Struss said. “We had it up on a projector and she would refresh it every couple of minutes. It was like 10:02 [a.m.] and they were supposed to announce it at 10. They announced it and we all went crazy.”

Struss was in middle school when Buchanan captured its first banner. She was a freshman in 2018 when the second championship was secured.

Buchanan’s The Herd was one of three finalists for the student cheering section competition sponsored by the MHSAA and its Student Advisory Council. The other finalists were Saginaw Heritage and Zeeland East.

“I wish we could bottle what The Herd does and give some to every school in the state,” said Andy Frushour, MHSAA director of brand management and advisor to the Student Advisory Council. “They have set the bar for student section organization, sportsmanship, constant noise and, most of all, fun. And they genuinely want to see other student sections succeed. So we’re excited to see who will take on the champs next year.”

Member schools of the MHSAA are encouraged in the fall to submit a short video via YouTube of their cheering section. That initial group, the Student Advisory Committee votes for nine semifinalists based on positive sportsmanship, student body participation, school spirit, originality of cheers, organization of the group, section leadership and overall fun.

The Herd, Saginaw Heritage and Zeeland East were selected as finalists after competing in the social media “challenge round.” After selecting its three finalists, the MHSAA and Student Advisory Council schedule site visits. Buchanan’s original visit had to be rescheduled when its opponent postponed the game due to illness.

The MHSAA, instead, visited Buchanan Feb. 11 when it faced Watervliet. It was the second stop for the MHSAA.

“We’ve established a place where you can be yourself. You can be outgoing. You can have fun. And you don’t have to worry about anybody judging you,” Buchanan senior Carter Aalfs said. “Many people don’t get to have an experience like this where you get to be with all your friends, all having a good time, while also supporting your school.”

The Herd will receive its third Battle of the Fans championship banner during halftime of the Division 2 boys basketball state semifinal in East Lansing at Michigan State University’s Breslin Center on March 27.

Niles gets defensive in win over St. Joe

NILES — Without one definite post player on the Niles girls basketball team, the Vikings were still able to stop... read more