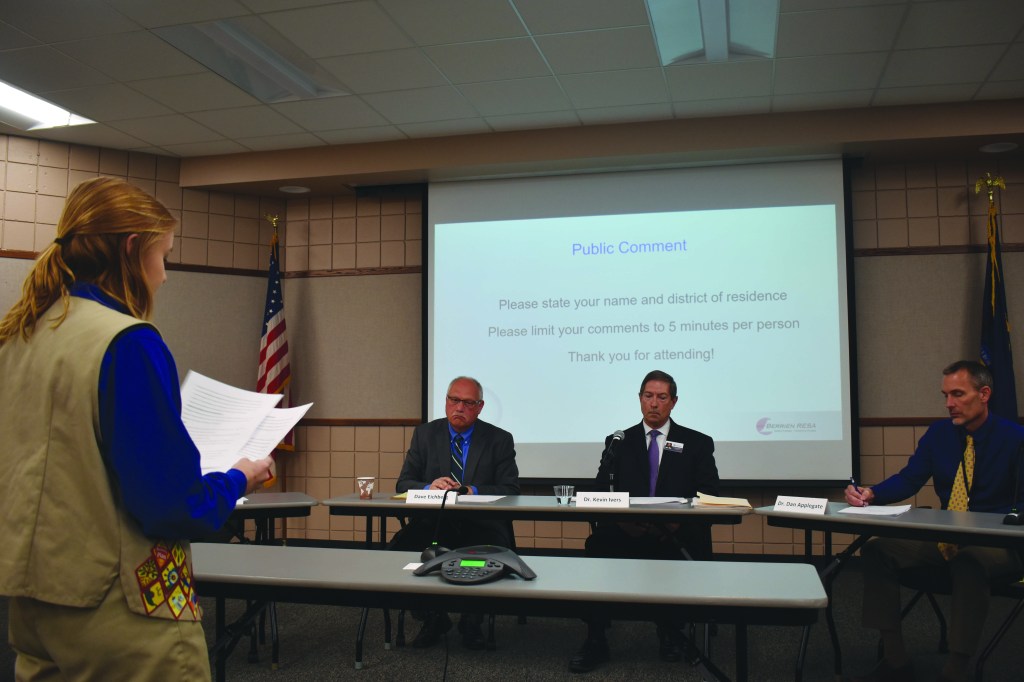 BERRIEN SPRINGS — A public hearing on potentially starting school before Labor Day ended with a definite answer: Berrien County school boards can vote to do so.

If an individual school board does vote to start school before Labor Day, the holiday and the Friday before are required by state law to be days off, creating a four-day weekend. The school year also cannot start before Aug. 31.

The number of days per school year would remain the same, meaning school would get out earlier, make-up days permitting.

Berrien RESA submitted a waiver request to the state of Michigan Jan. 28 with some school boards providing formal support — Niles, Brandywine and Buchanan included. Of 56 intermediate school districts and RESAs, 45 are pursuing or have received a Labor Day waiver, according to Berrien RESA data.

Dave Eichberg, Berrien Springs Public Schools superintendent, said talks about starting school earlier came from some superintendents in the county. They wanted to align their school year calendars, especially when it came to start times and spring breaks. That, he said, would allow common resources, such as Berrien RESA, to be better used.

According to Berrien RESA data, college enrollment by high school students has been on the rise in the county. Applegate and other superintendents want to increase those numbers. They said starting before Labor Day will better align spring and winter breaks with colleges and grant students more time to complete college credit.

Andrews University confirmed it would continue to begin its academic year before Labor Day as it has.

Southwestern Michigan College stated its calendar would likely be restricted in the near future due to collective bargaining and board of trustee approval, but it would work to align schedules as best it could.

Lake Michigan College did not respond by the time of publishing, but Applegate said the college was on board for moving to a pre-Labor Day start and aligning breaks.

Not everyone wants a pre-Labor Day start. Some, like Barb Lannert, preferred school start dates to remain as they are. She owns beach house rentals along St. Joseph’s beach and worried the time changes would keep late-summer tourists away.

Elise Voglewede, a St. Joseph High School junior, wanted, at minimum, school districts to not opt into an earlier start until the 2021-2022 school year. That would allow students and families who already have commitments around Labor Day to see them through.

Voglewede is a Mackinac Island Honor Scout. She planned to spend Aug. 29 to Sept. 7 volunteering on the northern Michigan island but does not think she and other scouts will be able to if their districts opt in to the waiver.

Michigan has required school districts to start after Labor Day unless they have a waiver since 2006. It is one of three states to require schools to do so.

“The reason our law changed was to promote more tourism in our state and high school students could get jobs in industries that were favorable to tourism,” said Berrien RESA Superintendent Kevin Ivers.

Eichberg said the county has a strong tourism industry. He said school districts should gather public input before making decisions, as he and the Berrien Springs school board plan to do for theirs.

A survey conducted by Berrien RESA and five school districts found that among 1,195 parents and staff responders, 54.8 percent preferred a pre-Labor Day start, 36.1 percent did not and 8.9 percent had no preference.

Applegate said the Niles school board has no plans yet moving forward, but that it will continue to gather public insight before deciding. He noted that many people he and the board gathered perspectives from had no preference for a school start date.

As school districts vote and gather opinions, they will also work to develop a five-year common calendar plan, which has the goal of better aligning major holiday breaks.