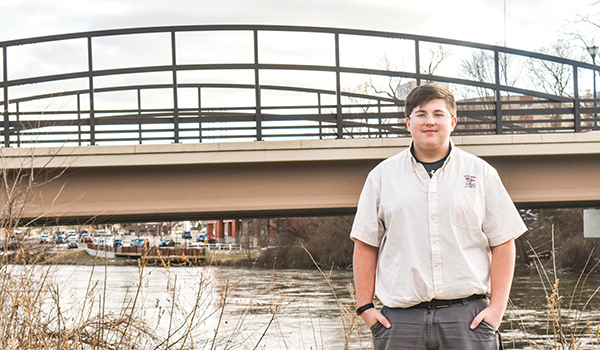 NILES — Joshua Sitarz’s first memory of the Niles Family Fun Fair and Music Festival was as a 14-year-old in 2015. He volunteered to pick up trash.

This year, Sitarz, now 18, will organize it.

Two weeks ago, the Berrien Springs High School student and St. Joseph resident was elected as president of the Riverfront Optimist Club. He will replace Tom Majerek, who served as president since the club’s founding in 2002.

“I’ve wanted to be president, but I thought that at my age, I couldn’t, and nobody would want me to be an 18-year-old president of the nonprofit,” Sitarz said.

Other members did, however. Theresa Grimner nominated him at a regular meeting at the Niles District Library last Tuesday, Feb. 11.

Now, Sitarz is tasked with managing the annual four-day festival, which would from Thursday, May 28 to Sunday, May 31 this year pending Niles City Council approval Monday evening. The event is as old as Sitarz, created with the founding of Riverfront Optimist Club in 2002.

The club is part of Optimist International, a service organization that emphasizes youth services. Riverfront Optimist Club seeks to provide family fun through its free music, and its carnival rides, vendors and games.

Riverfront Optimist helped Sitarz, as a child, work his way into the leadership position he has now. It began with his father, TJ Martin, who brought Sitarz to the festival as he managed vendors for the club.

This piqued the then-seventh grader’s interest in the service group. He began attending meetings.

In 2017, he became an official member. In 2019, he helped coordinate all the businesses and events of the festival. In 2020, he was elected into the group’s highest position.

To help him adjust to his role, Sitarz said he has the help of Majerek, local members and Michael Listenberger, Niles resident and former Optimist International president.

Sitarz has determined his leadership method, too.

“One thing I’ve learned from people I’ve talked to, other presidents, is kind of like, giving the responsibility to somebody else rather than doing it yourself,” he said.

In the past, a few people would take on all of the fair and festival’s programming and vendors. That created stress for those members and limited the range of new ideas that continually reinvigorate the program.

Sitarz said that his youth and delegative leadership style might create a space where new ideas can make for a better festival experience. It could also allow other club members to become more engaged with the work leading up to the event.

Chief among Sitarz’s tasks will be the festival’s free musical lineup, which will perform at Riverfront Park’s amphitheater stage.

“Not everybody has the opportunity, you know, to throw out $200 to see a band,” Sitarz said.

The club has brought in large acts, such as Grammy-nominated bluegrass band, Audie Blaylock and the Redline. Sitarz wants to bring in musicians that the festival’s attendees want, not who Optimist Club members want.

Sitarz will also have to work with the city of Niles to ensure all paperwork is in, and proper safety and emergency measures are taken. At a Feb. 10 Niles City Council meeting, some officials made clear they would not tolerate another bout of fights and littering that occurred at the four-day event last year.

Niles City Council will vote whether to allow the festival tonight.

As the Niles Family Fun Fair and Music Festival draws near, Sitarz also plans to work with club members to see out two other goals: offer more musical opportunities and to bring in more people, especially young adults.

The public can see Sitarz in action at Riverfront Optimist Club’s next meeting at 5:30 p.m. Tuesday at the Niles District Library, 620 E. Main St.