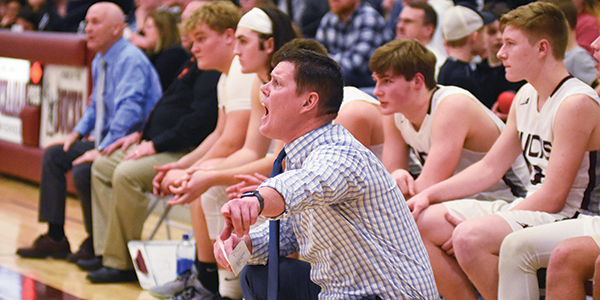 BUCHANAN — An up and down week for the Buchanan boys basketball team ended on a high note Friday night.

The Bucks, who dropped a 55-51 Red Division contest to Bridgman that may keep Buchanan from winning the outright championship, played with emotion and urgency throughout the contest in front of a packed gym.

The Bobcats struggled shooting the ball during the entire game, which allowed the Bucks to control the tempo of the contest.

Brandywine (14-2, 6-2 Red Division) led briefly to open the game, but found itself trailing Buchanan 18-10 at the end of the first quarter.

The Bobcats would not be able to find any answers for their shooting woes, nor could they match the emotion of the Bucks, who led by nine points (34-25) at halftime.

The lead stayed around double figures the entire second half.

“We tried to slow them down a little bit. They are a heckuva basketball team,” McBeth said. “We were fortunate to come out of here with a ‘W’ today. We slowed them down with that zone [defense], which we haven’t run all year. We had to pull something out of our hat. I am just glad it worked.”

EAST LANSING — The Dowagiac wrestling will have its work cut out for it when it competes in the Division... read more