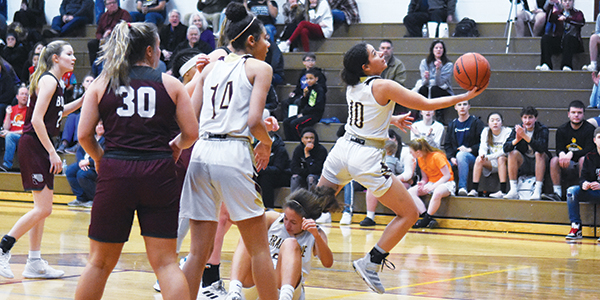 Brandywine seniors fill out their resume with BCS title

That all changed with a 73-38 win over their arch rivals from Buchanan.

Those six players have accomplished everything a team wants to accomplish over their four-year careers. They have won more than 80 games, district championships, a regional title and played in a state quarterfinal.

But until Thursday night, a conference championship had somehow eluded them. Not anymore.

Visiting Buchanan gave the Bobcats all they wanted for 16 minutes of their BCS Athletic Conference Red Division showdown.

The two teams were deadlocked at 26-26 at halftime. The Bucks had all the momentum as they had turned a 9-1 deficit into a tied game by outscoring the Bobcats 25-16 in the second quarter.

Brandywine headed into the locker room to regroup and try to figure out how to put the ball in the basket against Buchanan. The Bobcats started the game shooting well, but went cold. The Bucks (13-5, 7-2 Red Division) took advantage of it as they tried to get the Brandywine monkey off their back finally.

But like the first meeting between the two best teams in the Red Division, the second half would prove to be key. In the January meeting, Brandywine (18-0, 9-0 Red Division) turned a 22-9 halftime advantage into a rout by scoring 33 second-half points.

On Thursday night, the Bobcats scored the first 10 points of the second half and went on to outscore the Bucks 47-12 to turn the game into a rout.

“This group has done about everything you can in a basketball career,” said veteran Brandywine coach Josh Hood. “They are 80 something and about 11. They are regional champions. They are district champions. We had been close the last two years, but couldn’t get past Comstock.”

Hood said one of the goals each season is to put another number on the banners that list conference, district and regional championships.

“We take pride in that,” he said. “This is a very special senior class that we have. We did not have to say a lot at halftime. We were reaching [on defense]. We did not give them enough space. Buchanan has some super athletic guards, and they had a great game plan of attacking the rim. We did not want to trap as much in the second half, because sometimes teams have really good guards. We have to win it in the half [court].”

The Brandywine seniors were not about to let this opportunity getaway, and they all contributed to the win in one form or another.

Abdullah scored a game-high 22 points, while Schmidt hit five 3-pointers to end up with 18 points. Byrd and Rhodes finished with nine and seven points, respectively.

Buchanan coach Gabe Miller knew his team was going to have to come out of the locker room and duplicate their effort. The Bucks were unable to do so, which has been an issue at times this season with his young squad.

“That has been the problem in every game we lost this year,” he said. “We played well in the first half. Against Niles, I thought we had a good first half, and then we came out and had a rough third quarter. Michigan Lutheran was the same deal. Bronson was similar. Obviously, this a team that will make you pay when you do not execute. They shot very well and made us pay.”

Brandywine will put its undefeated record on the line Tuesday night at Gobles, while the Bucks host Allegan in a non-conference contest.