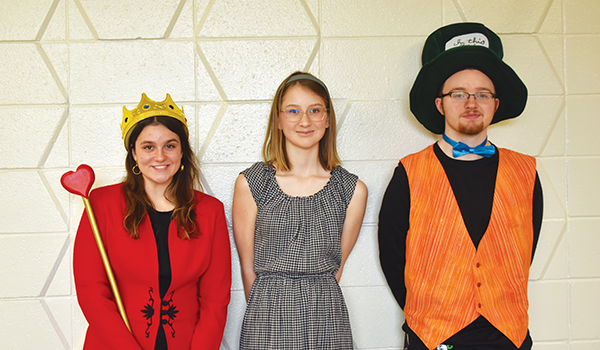 NILES — Walk past Brandywine Middle/Senior High School’s lecture hall and one might hear a variety of hoots, screeches and nonsensical statements. Peer in, and one might see high school students dressed in eccentric costumes, from playing cards to a pink cat sweatshirt.

It is a regular rehearsal for students of theater teacher Kevin Smith. They are preparing for their production of the play, “Alice in Wonderland.”

The students will perform twice to Brandywine students and twice to the public on the lecture hall’s stage, 1700 Bell Road, Niles. The public performances are at 7:30 p.m. Thursday, March 5 and Friday, March 6. Tickets are $3 per adult and $2 per student and can be purchased when doors open at 7 p.m.

Audience members may be familiar with the play’s inspiration, the novel “Alice’s Adventures in Wonderland” by Lewis Caroll. The 19th-Century book has sparked multiple Disney movie adaptations and a cult following.

William Glennon’s play adaptation makes good use of the novel’s popularity, Smith said. It follows a group of community theater actors about to perform “Alice in Wonderland.” They pull in a daydreaming girl named Alice before the play’s beginning to be their protagonist. She thinks the characters are real, not performers.

The play-within-a-play format brings the audience in on a running metaphysical joke, Smith said.

Smith said he typically gives his theater students options for the play they will work to perform over the course of three months. When he read the first few lines of the script, though, he fell in love and chose it without it input.

Students loved it, too.

Zarah Vandygriff, a 12th-grade student in her third year of the class, said she enjoys how familiar yet unique the play adaptation is. When the class went to the West Michigan High School Theater Festival in Greenville, she said other schools were most excited for their performance.

Vandygriff was still dressed in her Queen of Hearts costume when she spoke, a heart-topped staff in hand.

Moments before, she had been on stage, criticizing protagonist Alice, played by sophomore Shannon McCubbin, during a trial over stolen tarts.

During the trial, the Mad Hatter, played by senior Michael Ingle in an oversized green top hat, tripped and hit his foot against a courtroom prop. Smith told him to do it again in the next run-through.

The flexibility for performance the play’s script and the silly theming offers is a quality Ingle, McCubbin and Vandygriff all said they appreciate.

Ingle’s and McCubbin’s favorite scene, the Mad Hater’s tea party, made use of Ingle’s occasional clumsiness, too. The script calls for him to gasp at one point during the party. Instead, Ingle dropped the tea cup in his hand.

“We want to create a moment that wasn’t supposed to happen,” Smith remarked during Thursday rehearsal.

Smith said the play’s flexibility is one reason why he chose “Alice in Wonderland.” About half of his class are new to theater. He wanted to create a space that gave them the comfort to experiment, take risks and be silly.

“It gives ‘Alice in Wonderland’ such an opportunity to just really be silly as an actor and just create these really weird characters,” Smith said. “A lot of fun things have happened with character development from students just playing around.”

With less than two weeks until their performance, the class is combining their free-spiritedness with hard work. Smith said the one drawback of using a class as rehearsal rather than time after school is that every bit of the 50-minute period has to count.

Next week, students will attempt to go off script while working on blocks of the play as if they were performing.

After the performance, students will work on more individual theatrics, such as monologues, during class time.