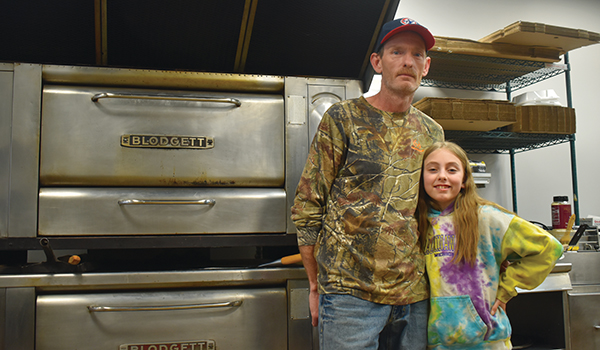 NILES — Opening CJ’s Pizza and Subs two weeks ago was a homecoming for Jeff Harrell.

About 10 years ago, Harrell was serving pizzas under the name Pine Lake Pizza at 114 N. Third St. The moniker was part of a 30-year pizza venture largely operated Rich Moore.

When Moore retired in late 2019, the restaurant was known as Third Street Pizza, a place with an ivied Italian villa atmosphere known for its single serve pizza slices.

Now, a few months later, Third Street Pizza’s open concept kitchen at the building’s entrance remains the same, but its seating has taken on blue hues. Its red brick walls have been replaced with those of a faux-graffitied variety, as Harrell redecorated when he took over with CJ’s.

“When I walk in here, and I just look around, it reminds me of walking into a higher-end place in Granger,” Harrell said. “[That’s] the way the atmosphere is here. But we’re not Granger prices. We’re still affordable.”

Harrell said he has worked in a plethora of pizza franchises, but he has been out of the art of pie-making for five years. It took him about five minutes to find his stride again.

One reason Harrell entered the business again was his love of cooking and baking. The other was to provide a quality pizza at an affordable price.

He knows that there are a dozen or so pizza restaurants in the Niles area, but he also knows that people tend to stick to just one or two when ordering. Each business has its own recipe, and each customer has their own preference, he said.

Harrell said his pizzas are for people who like fresh vegetables and meats and doughs and sauces made from scratch.

His pies come in hand-tossed or thin crust varieties. He is experimenting with deep dish and stuffed crust recipes for future menu inclusion.

The most frequently purchased menu items thus far, however, are CJ’s subs.

“I have baked so much bread in this last week,” he said. “I don’t remember baking that much in a month the last time we were here. The sandwiches are just flying out the door.”

Options include French dip, Stromboli and turkey. Each is made with fresh bread and served with French fries and applesauce.

Harrell plans to host an eventual grand opening ceremony. For now, however, he will continue baking pizzas and bread, allowing their doughy scents to waft down Third Street.