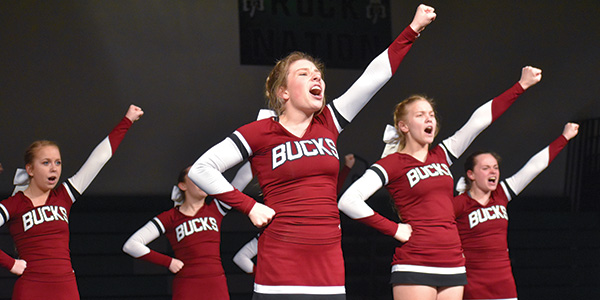 Buchanan went on to place third in the Division 3 contest, followed by Dowagiac, who placed fourth. Berrien Springs took home first place, with Coloma coming in at second. Edwardsburg took second in varsity Division 2, with only two points separating them from first-place Lakeshore.

Buchanan’s first-round 203.3 score was the highest it has had all season in the opening round.

The team, which started bonding at camp last summer, has continued to grow closer through sideline cheer in the fall, and now competitive, said veteran head coach Nikki Coquillard, who is in her second year of coaching the Bucks.

The team, composed of five upperclassmen and 10 underclassmen, has seen 100 percent improvement this season, Coquillard said.

As Coquillard is coaching her team during their routines, her daughter, Kelsey Coquillard, is performing for Buchanan.

“Well, sometimes she forgets that I’m the coach and wants to treat me like mom,” Coquillard said with a smile. “I try to keep it separate.”

Buchanan was back on the mat Saturday as it hosted the BCS Athletic Conference Tournament. Complete results were unavailable at press time.

“We haven’t had a home meet at least since I’ve been coach,” Coquillard said. “So, it’s going to be exciting to have all of our fans there and cheering us on. Maybe they will get us a little extra push.”

“The girls like to go last in round three because all the different teams are out here cheering them on, and it encourages them more,” she said. “Everyone is so supportive. When somebody falls, we encourage them to get back up and try again and to keep going.”

Edwardsburg’s varsity competitive cheer team hit two of its highest scores of the season on Thursday.

“They did so well tonight. I am so proud of them,” said Edwardsburg coach Jamie Whitfield, who also coached at Dowagiac. “We were a little disappointed we lost by two points to Lakeshore, but it will give us a little bit of drive for districts.”

Also performing in the meet was Edwardsburg’s middle school team. It took first place with a total score of 349.10. The middle school program is in its first year.

“We are really looking to grow our program over the years and get those reps in during the middle school years, so when they get up to the high school, they are ready to go,” Whitfield said.

Also impressed with her team’s performance was the Chieftains’ head coach, Cassidy Brown. Dowagiac ended the night with a total score of 561.18.

Brown said at the beginning of the season, the team only had four girls who had ever competed in cheer.

The Dowagiac competitive cheer team acts as a family, Brown said. She referenced a quote from Lakeshore high school’s football coach: “Family means forget about me, I love you.”

Brown and her assistant coach, Brooke Johnson, have preached the importance of bonds since the beginning of the season.

“You can’t do this sport if you don’t trust each other,” Brown said. “The trust is the key, and being a part of a family is the best part.”

STEVENSVILLE — It was a good weekend for area wrestlers as they began individual competition at the district level of... read more