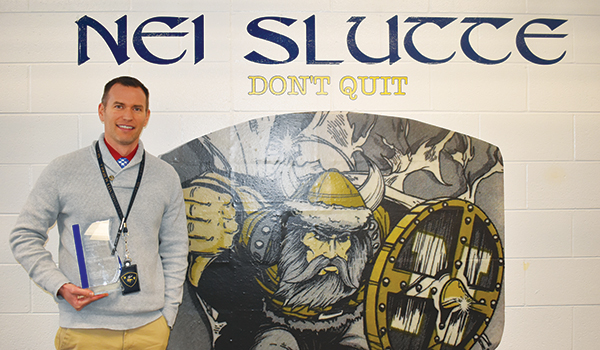 The 2020 Outstanding Assistant Principal Award was given by the Michigan Elementary and Middle School Principals Association, based in Mason, Michigan. It was the second year the award had given.

Winkler received the award at a MEMSPA conference in Grand Rapids. He came prepared to hear from keynote speakers and other principals on ways to help students. He left with the recognition as someone exceptional at helping others.

Winkler attended the conference with Ring Lardner principal Adam Burtsfield, who, along with other administrators, a teacher and a parent, nominated Winkler for the award.

The principal association’s committee then compared Winkler’s nomination with others before determining him as the recipient. They judged him based on qualities such as leadership, community engagement and skills in curriculum and instruction.

“He’s an exemplary leader, and he’s demonstrated that over the course of his tenure as an assistant principal,” said Paul Liabenow, executive director of MEMSPA.

Liabenow said he has seen Winkler’s impact at Ring Lardner and in the school district firsthand. He said Winkler has transformed the thinking, attitudes and outcomes of children about nutrition, physical activity and social-emotional learning.

Burtsfield and other nominators noted similar achievements of Winkler’s in their nomination letters. They also wrote that Winkler was well-liked by students because of his personability, kindness and willingness to talk.

“I recall picking up my son from school one day and heard how much he was surprised that Mr. Winkler remembered to ask about this soccer game and offered him tips on improving his ball-handling,” wrote parent Darla Schneider. “I’ve always been impressed how Evan talks to the children as if they are his own and how that child walks away feeling important and cared for.”

Winkler said connecting with children was why he became an assistant principal. Doing so builds trust, which makes it easier when the need for tough conversations with students  arise.

More importantly, he said, connecting with students helps their wellbeing. By building strong relationships, students can be healthier, happier and more likely to open up about issues they may struggle with.

Winkler’s fondness for connecting with students feeds into a larger goal he has had throughout during his three-and-a-half years as Ring Lardner’s assistant principal: to create a “whole child education.”

“We understand kids have a lot of stress,” he said. “Middle school is just a crazy time, anyways. You’re going through a lot of puberty. A lot of chemical changes are going on in the brain. You’re having hard time dealing with your emotions and other students and teachers.”

To help, Winkler has helped worked with teachers to institute a curriculum that goes beyond academics. He has instituted programming that builds social-emotional health.

Some students take part in mindfulness check-ins. Some receive trauma-informed care. Others use a computer program to express their emotions and energy levels.

These programs and others are meant to help students understand how they are feeling and why.

Winkler and other staff also worked to create a health curriculum, including creating a health teacher position.

The most outwardly visible health improvement Winkler helped institute was a fitness center, funded and constructed by the National Foundation for Governors’ Fitness Councils. Staff and students applied for the fitness center last year.

Winkler said he and other staff plan to continue their emphasis on health into the next school year.

“I think there’s other trainings we can do for our staff that will help them,” he said. “I think that’s going to be a district focus.”