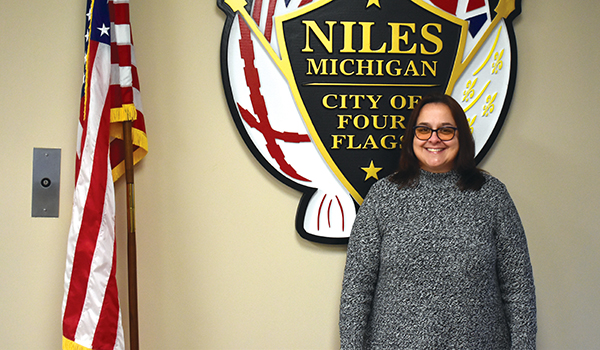 NILES — As Niles City Council considered, voted and passed ordinances to allow marijuana businesses in town, one issue was frequently raised: What about the scent?

Marijuana plants have a pungent, skunky odor that grow stronger when flowering or when smoked.

That smell had residents and, notably, council member Georgia Boggs worried that neighborhoods near businesses would be blanketed with it.

But other council members have pointed out that the ordinances the council passed were made to regulate marijuana businesses, odors included.

Vitale was referring to the exterior of The ReLeaf Center, 1840 Terminal Road, Niles.

In a separate back part of the facility, where 1,200 marijuana plants are grown and processed for medical or recreational consumption, the smell does exist.

Some flowers are budding, but Vitale said its smell was not strong. The scent grew fainter as she and other city leaders moved from plants that were budding and to sprouts in a nursery.

But no smells escaped those rooms, Vitale said.

“I don’t have any concerns,” she said. “There were really no agricultural smells at all. It’s remarkable what these carbon scrubbers are able to do.”

Carbon dioxide scrubbers are set up throughout the facility. The metallic mechanisms are often used in agricultural and industrial contexts to regulate the amount of carbon dioxide in the air. When paired with methods to control heat and humidity, these systems can help plants be properly grown and stored.

Another effect of the scrubbers is reduced odors.

This was the case in The ReLeaf Center, Vitale said. Even if the business maximizes its growing operations to 1,500 plants, the smell outside the grow facility should not change.

While the ReLeaf Center could not be contacted by the time of publishing, Crew Chamberlin, of upcoming marijuana grow business, Green Stem, said odor should not be a concern if done correctly.

Chamberlin plans to use a double cycle of carbon scrubbers and ozone generators to regulate the creation of odor at the former Simplicity Pattern Company, 901 Wayne St. The plants will be stored in a room inside of a larger room, both of which will be sealed.

“The real issue of odor comes when these compounds are volatilized,” Chamberlin said. “Typically, it’s heat or exposure to oxygen that allows oxidizing. So, when they break off, that’s what you’re smelling.”

By controlling the atmosphere, Chamberlin can minimize odors from catalyzing, whether it be in the growing, processing or provisioning process.

Regardless of odor control method, Niles’ marijuana ordinances require all marijuana businesses to form a plan of control before local licenses can be approved. They must also develop plans to prevent smoke, debris, dust, fluids and other substances from being created.

Failure to do so forces owners to take “immediate, full clean-up and correction” of the leakage, according to an ordinance.

The city of Niles plans to purchase an olfactometer to properly measure the smells of a marijuana business and the surrounding area. The equipment is shaped like a science fiction laser gun. The user puts the butt of the gun-like object to the nose and inhales to activate the machine.

If Niles purchases the equipment, they may use it for their yearly inspections of marijuana businesses that are required to renew licenses. The state of Michigan may also use scent-measuring technology if it inspects a business.

“We want to make sure they are keeping on top of their own business before we can get there, but it also gives them the latitude that if we do come out, the ability to fix it,” Vitale said.

The community development director said the next marijuana grow businesses likely to open will be MichiCann on Renaissance Drive in Niles’ industrial park and Green Stem at the site of the former Simplicity Pattern Company, 901 Wayne St.

While marijuana businesses in Niles will be regulated for odor, law enforcement have said at city council meetings in 2019 that they have a tough time finding the culprits of odor complaints that stem from individuals’ homes.

Homeowners are able to use marijuana in their homes according to Michigan law.