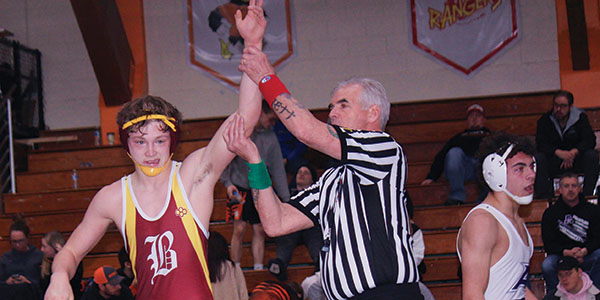 Hunter Heath is the first Bobcat to win a county championship since 1996. (Submitted photo)

ST. JOSEPH — For the first time since 1996, the Brandywine wrestling team has a Great Berrien County Meet champion.

Hunter Heath went 4-0 to capture the 140-pound title at the meet hosted by St. Joseph on Saturday.

Lakeshore claimed another county meet championship with 213.5 points, while Niles was second with 193 points, Edwardsburg third with 132.5 points, and Dowagiac fourth with 119 points.

Heath defeated Jonathan Phillips, of Decatur, by technical fall (17-2) after receiving a first-round bye. In the semifinals, Heath won by major decision (13-0) over James Harris of Lakeshore before pinning Edwardsburg’s Jacob Reece at 5:14 of the title match.

Finishing second for the Vikings was Mike Robles at 103. Brandywine’s Mat Cox was the runner-up at 125 pounds.

Dowagiac finished with three second-place finishers, while Cassopolis had one runner-up.

Finishing second for the Chieftains were Lamberto Paredes at 160 and Wyatt Bailey at 285. Cassopolis’ Gage Collins was second at 171 pounds.