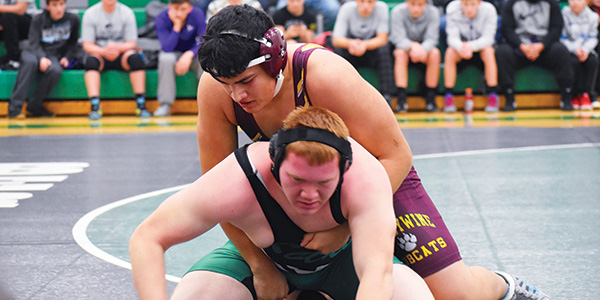 Brandywine’s Cruz Sanchez is glad he returned to the sport of wrestling thanks to encouragement of teammates. (Leader photo/HANNAH HOLLIDAY)

BERRIEN SPRINGS — As a Brandywine freshman, Cruz Sanchez was on and off again with wrestling. This year, the junior is all in as he returned to the sport and now competes at the 215-weight class for the Bobcats.

The reason he decided to return to the mat was simple — his friends.

“They were encouraging me and told me that I could do well,” Sanchez said, following his team’s two victories on the night. “I am still learning and improving my skills on the mat.”

After every match, Sanchez said he notices improvements, and although he regrets not sticking with wrestling sooner, he is thankful for the opportunity to get along with his teammates and cheer them on.

“We get along very well, and we cheer on each other in order to do our best. I see every match that I improve,” he said. “I do regret it. I wish I would have stuck with it in those two years.”

The Bobcats went 2-0 on the night after defeating Lawrence High School 65-17, and Berrien Springs 72-3.

Against Brandywine, the Tigers forfeited eight matches. Berrien Springs forfeited 10 matches, with the 135-weight class being a void for both teams.

Brandywine coach Rex Pomranka said Alexis Cox’s performance against Lawrence’s Jack Mclemore was impressive in the 130-weight class. Mclemore ended up beating Cox 19-3, but Cox received a standing ovation from a group of Brandywine supporters and her teammates.

“Alexis is wrestling up a weight class and did a good job,” Pomranka said. “She almost had him, and she is starting to get some confidence.”

Pomranka also praised Sanchez, who lost both his matches of the night, but went into overtime against Berrien Springs’ Ryan Gonzalez.

“[Sanchez] is doing well and gaining confidence. He had two good matches there,” Pomranka said. “Overall, it was good for us tonight.”

Despite fighting flu bugs and injuries, Pomranka said he is happy to have an almost full team.

“Half the battle in wrestling is getting 14 guys in to wrestle,” he said. “That’s half the battle, and then if you can have some quality kids there, then that’s a plus.”

In the Bucks’ win over Lawrence, Caleb Sweeny wrestled at 140, picking up a pin in 44 seconds to earn Buchanan its victory.

“I try to tell the kids every time that everybody has to be ready,” Riggs said. “You don’t know who it is going to come down to. It’s not the old days where you start at 103 and go to 285. Now, everybody is going to be put in that pressure situation of, ‘I might have to win it for the team.’”

With little more than half a season completed, head coach Andy Riggs said his team is showing improvement every day.

“As we go match to match, guys that were getting pinned at the beginning of the year might still be getting beat, but they are not getting pinned,” Riggs said.

Riggs said the sport of wrestling is a process.

“Some of those guys can get it overnight and really make huge strides in the matter of a year, but like any sport, if you want to be good at it, you have to put the time in,” Riggs said.

During the season, Buchanan has struggled to fill its 189 and 215 weight classes.

“That’s alright. Those things are going to happen, and the guys you have, you make better every day,” Riggs said. “We’ve got a great group of kids that make it fun to get to practice every day and to wrestle every day, and that’s half the battle.”

Buchanan will take to the mat again at 6 p.m. on Wednesday, Jan. 29, at the BSC dual meet. Brandywine will travel to Quincy High School on Saturday for a 9 a.m. tournament.

Jordan Simpson is a sophomore on the Dowagiac wrestling team. What has been one of your greatest accomplishments as an... read more