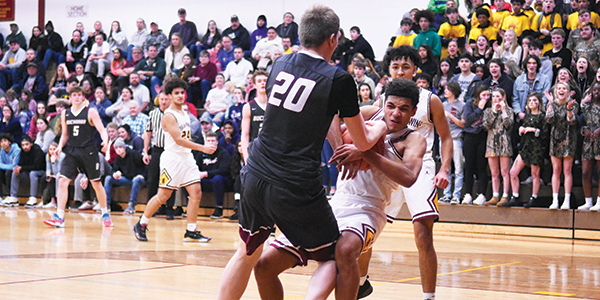 NILES — If the Brandywine boys basketball team wants to contend for a BCS Red Division championship, as well as make a long run in the postseason, then it better figure out to way to play a full 32 minutes, according to coach Nathan Knapp.

The Bobcats came out and created 16 minutes of chaos with its defensive effort in the first half against arch rival Buchanan Friday night. But Brandywine could not keep up the momentum and nearly gave a 38-23 halftime advantage away to the Bucks.

The Bobcats were able to make just enough free throws down the stretch to hold off Buchanan 66-56 to improve to 8-0 overall and 3-0 in the Red Division.

“It’s pure hustle,” Knapp said about the first half. “The kids were dialed in tonight, and it was good to see. We have slow first halves and usually have great second halves. We came out ready to go tonight, and we need to be able to make adjustments during the game.”

For two and a half quarters, host Brandywine played solid defense.

While the effort was still strong in the third quarter, Knapp could see his team was not quite the same, and by the final quarter, he knew the Bobcats were in trouble.

“We were lucky to survive this one,” said. “It’s another learning thing. We haven’t played 32 minutes all year, and didn’t expect to tonight. We’ve got a lot of work to do, but we’re gonna get there.”

Trailing by 15 points, 47-32, the Bucks exploded offensively, scoring 24 points and cutting the deficit to 60-52 with less than a minute to play on a basket by Buchanan center Logan Carson.

The Bobcats connected on 14 of 20 free throw attempts, including 9-of-12 by senior Jordan Abrams, who scored a game-high 24 points.

Brandywine seniors get the message