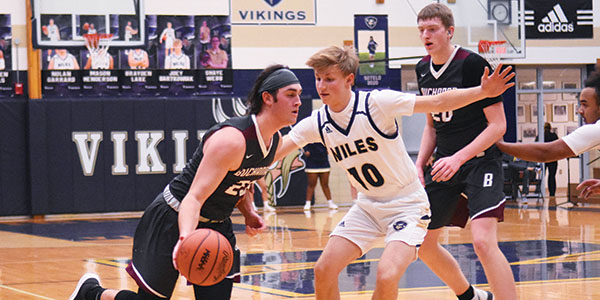 NILES — It had been 23 days since Buchanan last played a basketball game, and it has a huge BCS Red Division showdown with undefeated Brandywine on Friday night.

Buchanan coach Reid McBeth was concerned about how his team would play after the long layoff. So, when his team trailed just 26-24 at halftime, McBeth was pleased and knew the Bucks would have a shot at knocking off the Vikings Tuesday night.

Buchanan looked a bit rusty for the first two quarters, but shook off the layoff and took it to Niles in the second half of the non-conference contest, outscoring the Vikings 38-25, to earn a 62-52 non-conference victory.

“We were trying not to use that as an excuse, but we had not played since Dec. 20,” McBeth said. “We knew that the first half was going to be rough trying to find our groove again, especially after our last game was a double-overtime win. You want to come back right away some more, but we had to wait 23 days. It was just like the first game of the year. You have to get the kinks out.”

McBeth said trailing by just two at the half gave his team confidence and a lift.

“We came out and played solid in the second half,” he said. “Obviously we have a big game Friday against Brandywine, so to come in here and get a ‘W’ against a cross-town rival is important. Once we got through that first half, I thought out kids played hard, and we executed stuff we needed to execute, especially down the stretch.

Buchanan (4-1) was led in the pivotal fourth quarter by Brad VanOverberghe, who knocked down three of his four 3-pointers and scoring 11 of his team-high 19 points to help the Bucks pull away.

Gavin Fazi finished off the victory as he connected on 6-of-8 free throws down the stretch. He finished with 10 points.

In the opening half, the Bucks went inside to big man Logan Carson, who scored 15 of his 18 points in the first two quarters. Chris Young chipped in with 11 points.

Niles (2-5) is not blessed with a lot of natural scorers according to first-year coach Patrick Touhey. So when Mari Nichols exploded for a game-high 22 points, which included six 3-pointers, he was pleased by the effort.

“Mari had an unbelievable game overall,” he said. “Scoring-wise, we just did not have enough players step up to score the kind of points we needed. I thought there were spurts. When Joey Bartowiak came in, he hit two big threes to keep us competitive. We are not a prolific scoring basketball team. We are not a team loaded with scorers per say. So, we fight for every point that we get.”

“If we have a game like Mari had tonight, obviously that helps us a great deal,” he said. “But that is not something we can necessarily lean on every night. We have to execute our offense, We have to shorten the game the best we can, and we have to be patient.”

Despite the loss, Touhey was pleased with his team’s effort and felt like it was good high school basketball game that was entertaining for the large crowd that came to watch the two local teams square off.

“It was a fun game to be part of,” Touhey said. “Two local teams came in and put on a very strong, hardworking performance.”

Touhey took the blame for Niles not being able to slow down the Bucks, especially VanOverberghe, in the fourth quarter.

“We gave up nine baskets on our inability to switch,” he said. “We teach switching on off-ball screens. VanOverberghe buried three threes on us in the corners because we did not switch. That is something we try to teach, but obviously, we are not doing a very good job of it, because, at crucial times, our kids are not executing what they need to be executing. That falls on me. I have got to find a way to help these kids internalize that, so they just do it by second nature.”

Besides Nichols’ output, Niles also got 10 points from Cerious Wilson and six points from Bartkowiak.

Niles hits the road Friday night as it travels to St. Joseph for a SMAC West Division contest against the Bears, set to begin at approximately 7 p.m.

DOWAGIAC — Trae Brookins had been in this situation before. With two minutes left on the clock in the fourth... read more