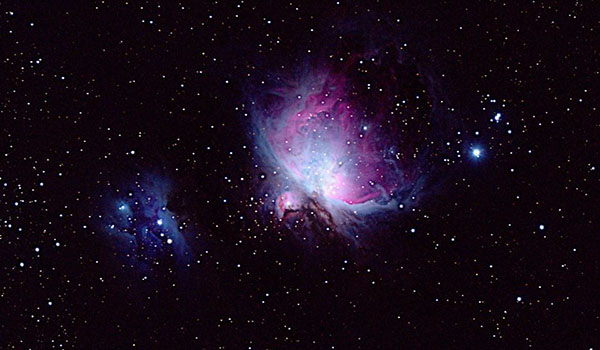 Pictured is the constellation Orion that Robert Parrish took while at Lawless Park. (Submitted photo)

“This really is a big deal, and we are only realizing the tip of the iceberg,” said Director of Cass County Parks Scott Wyman. “It really, really is big.”

The International Dark-Sky Association is the leading organization combating light pollution and the excessive use of artificial light worldwide, according to its website. The association provides parks, communities and places with Dark-Sky designations to applicants that fulfill the required criteria, which includes achieving Dark-Sky friendly lighting, advocating for the protection of the night sky, having appropriate light readings and more.

The push to have Dr. T.K. Lawless Park named a Dark-Sky Park has been spearheaded by parks board member and Dark-Sky advocate Robert Parrish, of Edwardsburg. Over the last two and a half years, he estimates he has spent more than 500 hours educating people about the importance of dark skies through various speaking events, including a presentation to state legislators to advocate for a bill to make it easier for non-state-owned lands to be named Dark-Sky Preserves.

Parrish and the parks department spent more than two years putting together materials and working to have Dr. T.K. Lawless Park named a Dark-Sky site. When Parrish received the news on Jan. 5 that the park had been accepted, he started to cry.

“I’m a big baby,” he said with a laugh. “I’ve been walking on air for the last few days. To pat myself on the back, this is quite the accomplishment. This will draw people from beyond Michiana to Lawless Park and showcase how beautiful it is and the recreation available at the park. I’m also hoping, as an ancillary benefit, that it will call attention to light pollution.”

In addition to his desire to preserve naturally occurring dark skies and stargazing, Parrish said he had dedicated himself to the pursuit of a Dark-Sky designation in honor of his late father, Andrew Parrish. With emotion filling his voice, Parrish said he knows his father would have been pleased to see the work the county is doing to preserve the night skies he used to watch with his son.

“This has been a long, sometimes difficult journey, but it has been worth it,” he said.

Though the designation of Dark-Sky Park has been achieved, Parrish said the parks department’s work is not yet over.

To continue to comply to the requirements of being a Dark-Sky Park, the parks board is committed to having Dr. T.K. Lawless Park open a certain number of nights for star viewing, and to provide special night programming events, according to department officials.

“There will be growing pains, and we will have to find ways to deal with them,” Parrish said. “But now, are over the moon. … This is going to be a really big deal for Cass County.”

An official grand celebration of the International Dark-Sky designation will be hosted during the annual star party on April 24 to April 26 at Dr. Lawless Dark-Sky Park.