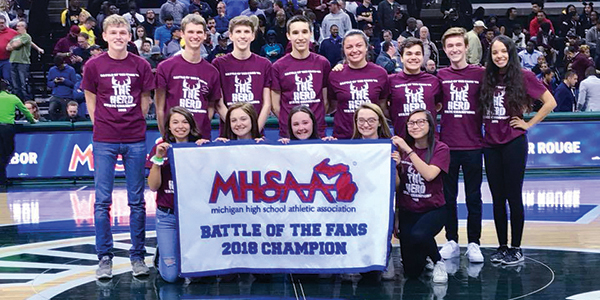 Buchanan’s The Herd is hoping to add another championship banner to the rafters. (Leader file photo)

Buchanan a semifinalist once again

EAST LANSING — Some things are just meant to be.

Like death and taxes, Buchanan’s “The Herd” is something that you can count on when it comes to the Michigan High School Athletic Association’s Battle of the Fans.

Nine student cheering sections from MHSAA member schools have been selected from the first phase of this year’s “Battle of the Fans IX” contest to take part in the “challenge round” as they vie for this year’s championship recognizing the top section in the state.

This year’s nine semifinalists are Saginaw Heritage, Traverse City West and Zeeland East from Class A; Buchanan, Caro, and Frankenmuth from Class B; and Hart, Petersburg-Summerfield and Reese from Class C/D.

Battle of the Fans IX, organized by MHSAA staff and its 16-member Student Advisory Council, kicked off by inviting schools to submit short videos, via YouTube, of their cheering sections in action by Jan. 11. The advisory council has selected nine semifinalists to accomplish a list of tasks showing off their sections over the next 12 days — and the council will then select three finalists for MHSAA visits.

This year’s winner will be announced Feb. 21, and recognized March 27 during the MHSAA Boys Basketball Semifinals at Michigan State University’s Breslin Center.

Semifinalists are required to complete 10 challenges via their social media channels by 11 p.m. on Jan. 25.

Five elective challenges (taken from a list of 15 options) will allow semifinalists opportunities to show the unique characteristics that make their sections elite. Descriptions of all 20 challenges are available on the MHSAA website at ow.ly/BVPg50xTXGH.

“This year’s semifinalists feature some heavyweights of past BOTF competitions, but also some faces we haven’t seen in a while,” said Andy Frushour, MHSAA director of brand management and advisor to the Student Advisory Council. “Over the next two weeks, we’ll learn a lot about what these student sections bring to every game night.”

The Student Advisory Council will select the finalists for announcement Jan. 27 on the MHSAA Second Half website (secondhalf.mhsaa.com). MHSAA staff and Student Advisory Council members will visit all three finalists for home basketball games during the second half of this regular season, with coverage and video from those visits and the announcement of the winner all to be published on Second Half.

The winner will be selected by another advisory council vote based in part on support each section receives on the MHSAA’s social media sites.

All social media postings regarding Battle of the Fans IX should include the hashtag #BOTF. The MHSAA will share semifinalists’ challenge posts over the next two weeks on its Instagram, Twitter, and Facebook sites. The MHSAA also will post from the three finalists visits on those channels.

A total of 20 schools applied for this year’s contest, including nine schools for the first time to bring the total to 105 member schools that have applied for the contest at least once over its eight-year existence.

Buchanan and Traverse City West both have applied seven times and will compete in the semifinals for the third-straight year. Buchanan was the BOTF champion in 2013 and 2018, and West won in 2016. Saginaw Heritage and Petersburg Summerfield also are repeat semifinalists; Heritage advanced to the finals as well in 2019.

“We’re basically in the ‘regional’ round now if you compare this competition to our other tournaments,” Frushour said. “This group of nine is just getting warmed up and preparing for making it to the ‘state finals.’ We’re excited to see the creativity and positivity of the nine semifinalists.”

The other first-time applicants were Fremont, Grosse Ile, Grosse Pointe South, Howell, Lake Fenton, Melvindale, Morenci, and Stevensville Lakeshore. Reigning BOTF champion North Muskegon did not apply for this year’s competition. To view all applications on YouTube, click on ow.ly/jjKe50xTTaF.

The contest is sponsored in part by the United Dairy Industry of Michigan, which promotes Michigan’s locally-produced dairy products and nutrition education. Rules plus links to past years’ coverage of the contest can be found on the MHSAA site at mhsaa.com/BOTF.

The Student Advisory Council is made up of eight seniors and eight juniors who each serve two-year terms.

NOVAK: I cannot believe I saw another one

There was no way of knowing that history would repeat itself when it came to the American Football Conference playoffs.... read more