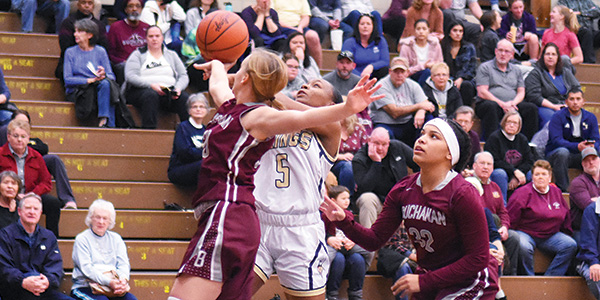 Niles’ Alycia Patterson is fouled as he goes to the basket in the Vikings’ 48-40 win over No. 3-ranked Buchanan Wednesday night. Patterson finished with 21 points as Niles improve to 4-1 on the year. (Leader photo/SCOTT NOVAK)

Niles knocks off No. 3 Buchanan

NILES — For No. 3-ranked Buchanan, Wednesday night’s match-up with Niles was a good way to tune up for their BCS Athletic Conference Red Division showdown with Brandywine next week.

For the host Vikings, it was a chance to see if it could shake off not having played for nearly three weeks.

Despite a slow start, Niles was able to shake off the rust in time to knock off the Bucks 48-40 to improve to 4-1 on the season.

Buchanan, which suffered its first loss in seven games, a chance to play Monday night allowed the Bucks to get off to a great start. Buchanan scored the game’s first nine points as Niles struggled to find its rhythm on offense.

Unfortunately for the Bucks, they were unable to maintain that momentum and the Vikings scored the game’s next 11 points, Buchanan would ultimately take a 14-11 lead into the second quarter.

Buchanan coach Gabe Miller was not happy with his team’s inconsistency during the contest, while in other phases of the game, he was pleased.

“The way the schedule worked out, we really hadn’t been tested with our full team,” he said. “We played a close game with Coloma, but we didn’t have a couple of players because of a band concert. It was good to see the pressure and how we handled it. I thought we got a little tight in the second half even though we had the lead coming out. We stopped executing defensively and let (Alycia) Palmer and (Amara) Palmer get loose a couple of times.”

Patterson and Palmer would play a big role in the second half when Niles erased the Bucks’ 24-21 halftime advantage. The Vikings would lead 35-31 heading into the final quarter after outscoring Buchanan 14-7 in the third quarter.

Niles coach Jessica Johnson credited the defensive effort of Alexis Rauch and Davies guarding Buchanan center Faith Carson, who ended up with a game-high 22 points, of which 14 came in the first half.

Carson was held to eight second-half points, including just two in the final eight minutes of the game.

“That three-week break is difficult for us,” Johnson said of the slow start. “We did the same thing last year. It is hard to come back. It takes a while for us to get our game legs under us.”

Johnson said her team will have to realize that it may take some time to get back into the rhythm it had prior to the break.

“We had so many ups and downs tonight,” Johnson said. “Individually I think they are struggling because they didn’t play the kind of game they wanted to tonight. They have to understand that it takes a minute to get our game legs back under us. I am hoping tonight’s win will help going into a big game against Portage Central on Friday night.”

The Vikings host the Mustangs in a SMAC West Division contest, which is scheduled to begin at 5:45 p.m.

Miller hopes his team learned some things that will pay off in its game against Brandywine.

“We have to take care of the ball better,” Miller said. “I thought in the second half we got a little undisciplined and a little scared of the moment. We weren’t in our lanes like we should have been and we didn’t execute as far as the ball reversals. But I think this was a good learning experience for my young team.”

Besides Carson, Buchanan got eight points from Alea Fisher and five points from Emma Lozmack.

Buchanan will host the Bobcats at 7 p.m. on Thursday.