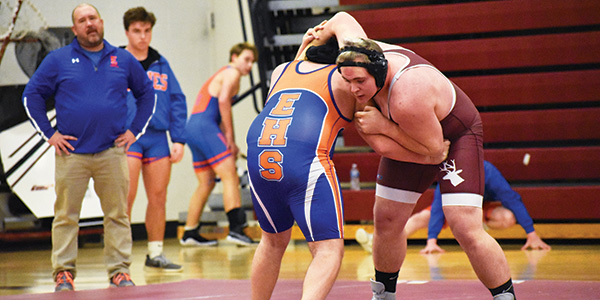 BUCHANAN — With more than 50 wrestlers lining the sides of Buchanan’s gym, it was clear the Edwardsburg wrestling program has depth.

Having only graduated one senior, Michael Tatay, from last year’s Wolverine Conference and district champion team, the bench was filled with returning letterman and a large freshman class of more than 25 wrestlers.

With it being early in the season, both the Bucks and Rangers are still working to fill a lineup.

“We got tough kids,” Buchanan coach Andy Riggs said. “We got to get in better shape. The nice thing about them is whether we got pinned or not, at least we were fighting the whole time. We were out gunned a little bit against Edwardsburg. That’s going to happen when they’ve got 55 kids. We will take the effort all day long.”

Riggs was also impressed with Drew Ruth’s performance, except for a call not going his team’s way.

“As much as we want to win every match, we are working toward the end of the year as everybody else is,” Riggs said. “This is just one small step, win or lose, we were proud of the effort from the kids. It’s the first match of the year,” he said. “We’ve got to take the good with the bad and keep improving.”

The Rangers, who had just five competitors, including two regional qualifiers — Gage Collins and Nate Affriseo — both got beat by their Edwardsburg opponents.

The lone Ranger to score points on the night was William Westphal, who went three periods against Edwardsburg’s Austin Peacock at 135 pounds.

“Our 35-pounder did really well,” said Cassopolis veteran head coach Kenyon Ellison. “He had some great standups, and that was about it from what I’ve seen tonight.”

In the Eddies and Cassopolis meet, Edwardsburg head coach, Jesse Becraft was impressed with Tanner Hursh’s pin of Affriseo in the second period at 189 pounds.

“Tanner Hursh had a great night,” Becraft said. “He is usually our second string to his brother, [Dillion Hursh] but his brother wasn’t down to weight yet. So, he went out there and beat a really good kid from Cass tonight, so he really stood out.”

NILES — The Brandywine wrestling team got off to a rocky start in its season opener after dropping a pair... read more