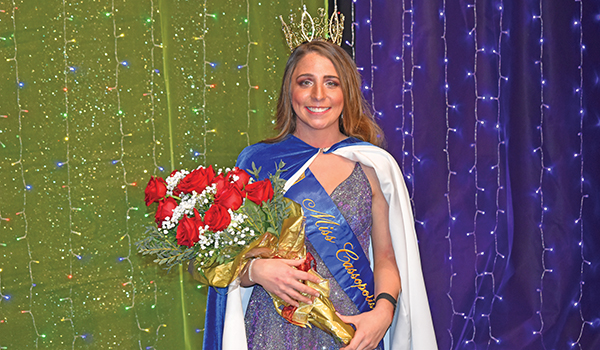 CASSOPOLIS — Sunday afternoon, Cassopolis teens Kaitlyn Hartsell and Adanna Collett stood, pinky fingers linked, on the stage at Ross Beatty Jr./Sr. High School, waiting to hear which one of them would be named their community’s newest representative. After an anticipation filled moment, Hartsell’s name was called, a glittering crown was placed atop her head, and she was named the village’s newest Miss Cassopolis.

“I am so beyond excited,” Hartsell said. “I’m so thankful for all the support from all the family and friends who came today and everyone who put this all together.”

Hartsell has wanted to be Miss Cassopolis for as long as she can remember, she said. She even competed in last year’s program, capturing a second runner-up win. After enjoying her experience last year, she decided to throw her hat in the ring once again.

Following her first-place win Sunday, Hartsell said she was shocked but excited, as being Miss Cassopolis will allow her to be a positive role model in the community that she loves.

“I want to be a role model for the younger generation and give them someone to look up to, and I want to be closer to my community,” Hartsell said, her hands shaking with excitement. “I think being Miss Cassopolis will allow me to interact with and get to know the community even more.”

Collett is also excited to be on the Miss Cassopolis Court of Honor and to represent her community alongside Hartsell.

“I’m excited to open myself up and be a part of the community,” she said.

In the coming year, as representatives of the Miss Cassopolis 2020 court, Hartsell and Collett will be spending time attending community events and volunteering in Cass County. Both said they are ready to begin.

“It just feels so great, and I am ready to be with my community all year long,” Hartsell said. “My one piece of advice for young girls looking up to me would be to never, ever give up on your dreams.”

CASSOPOLIS — In the fine print on the back of many name brand baby washes, words found in the ingredients... read more