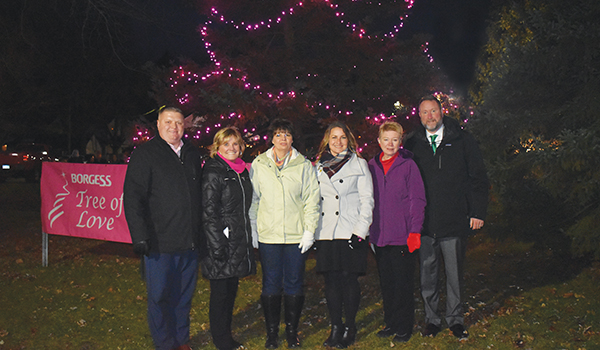 Pictured is a past Tree of Love event.

DOWAGIAC — Shirley Guilford does not believe in bad hair days.

The Cass County native was diagnosed with breast cancer in June 2006, after finding a lump on her own. Determined to not let her cancer control her life, Guilford remained optimistic.

Her worst side effect was hair loss. It was the hardest hurdle she had to conquer.

“Remember, there is no such thing as a bad hair day,” she said. “Any day with hair is a good day.”

Guilford was the featured speaker at Ascension Borgess-Lee Foundation’s ninth annual Borgess Tree of Love lighting ceremony hosted  Wednesday evening in Farr Park. The tree, wrapped with more than 1,500 pink lights, illuminated the night sky as members of the foundation, hospital staff and the community joined together in celebration.

So far, the foundation has raised $11,700 of its $12,000 goal for the Tree of Love Campaign. The campaign provides free mammography services for uninsured or low-income women and men living in Cass County. To date, Ascension Borgess-Lee has provided more than 250 free screening services.

The foundation will continue to raise funds until the end of the year.

“I am confident we can raise that last $300 and more,” said Beth Cripe, the development coordinator of Ascension Borgess-Lee Foundation.

During the ceremony, foundation members and hospital representatives read off breast cancer facts before introducing Guilford, who shared her own story as a breast cancer survivor.

Cancer first entered Guilford’s life in 1979, when her mother was diagnosed with one of the first cases of melanoma in South Bend. Her mother died the following year.

In 2004, Guilford’s husband was diagnosed with prostate cancer. The same year, her father-in-law died because of cancer, too.

After her own cancer diagnosis in 2006, Guilford’s life became filled with doctors’ appointments and tests.

“After all the results were in, [a surgeon] told me all that I would have to go through,” she said. “This is where he became aware that I was a tough cookie. I tried every idea I could come up with to avoid chemo.”

Guilford’s empowerment prevailed in her thoughts.

“I told myself that I am not going to let this control me,” she said. “I am going to control it the whole way through, and I did.”

Guilford went through mastectomy surgery. She also had eight chemotherapy sessions and six weeks of radiation.

Still with her determination to prevail, Guilford continued to show up to everyday of work and even entered into a pedometer challenge during her chemo. Daily, she would be walk eight to10 miles.

To cope with her hair loss, she wore different hats every day. At work, it became fun for her colleagues to see how she would match her hat with a specific outfit.

Throughout her battle with cancer Guilford came out stronger than before.

“My husband and I really do appreciate every day we have good health,” she said.

Guilford’s hair has since grown back, and she reminded the audience of no such thing as bad hair days.

Natalie Ryder, the administrator at Ascension Borgess-Lee Hospital, ended the ceremony with a quote from Helen Keller.

“Alone we can do so little. Together we can do so much,” she said. “Thank you for your generous donations and for helping the Borgess Tree of Love shine on.”