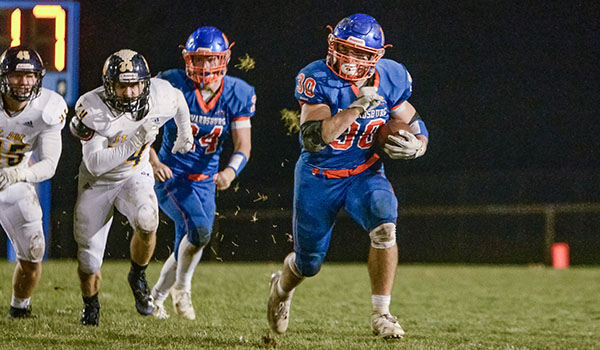 Dillon Hursh is off to the races on an 87-yard touchdown run against St. Joseph Friday night. (Leader photo/TIMOTHY RITTER)

EDWARDSBURG — The last time the Edwardsburg Eddies and St. Joseph Bears played in the MHSAA state tournament, the Bears came away with the district championship in 2015.

Now four years later, but this time in the pre-district game, the Bears traveled to Leo Hoffman Field to take on the second-ranked (Division 3) Eddies, who were looking to add to their 23-game winning streak.

And although most people thought it would be a closer game, Edwardsburg (10-0) dismantled St. Joseph (6-4) by the score of 42-8 and set up a district final at Zeeland West at 7 p.m. Friday. The Dux (9-1) knocked off crosstown rival Zeeland East 38-7. The game will be played at Zeeland Stadium.

Oddly enough, this wasn’t the first time the Eddies played the Bears this season. Both teams scrimmaged each other during the preseason, and Edwardsburg had a tough time.

“We could not run the ball against them in the scrimmage,” Edwardsburg Coach Kevin Bartz said. “But they also made the mistake by making a comment that we couldn’t pick up a first down against them, so that wasn’t a good idea.”

The Eddies were able to get a first down on their first play after forcing the Bears to punt, which was also an 87-yard touchdown run by Dillon Hursh.

“Our line was dominant up front,” Bartz said. “They [St. Joe] are big upfront, but I thought our kids did a much better job of getting off the ball. We were getting to their linebackers. They had no penetration, they had no movement, it was great football.”

Edwardsburg was also able to get Ethan Griffin back as well just in time for the state tournament. He has been out since week 4 and his presence was felt immediately.

“We honestly weren’t sure if he would be able to play,” Bartz said. “He was still hobbling around a little bit earlier in the week, but just his size and presence has tightened things up for us. To get him back right now is huge at this point of the year.”

Hursh also scored on a 69-yard run, and Mac Gaideski added touchdown runs of 14 and 34 yards in the second quarter.

St. Joseph at times found success moving the ball throughout the game, but had a very difficult time reaching the end zone.

It punted four times, turned the ball over on downs once and also gave up a fumble and interception to the Eddies’ Tanner Hursh and Drew Bidwell respectively.

Bidwell also caught a touchdown pass from Conner Nelson in the third quarter when the Eddies were facing a fourth-and-goal from the Bears’ 17-yard line. St. Joseph did not see the pass coming and from then on, the game was out of reach at 34-0.

Jackson Hoover put the game into a running clock midway through the fourth quarter on a 42-yard touchdown run before the Bears finally got on the board with a couple of minutes remaining.

“This is the season we talk about and gear up for,” Bartz said about the way the Eddies play in November. “The nine-game regular-season schedule is seen as sort of a preseason before the state tournament. The offseason training is for us playing in November, plus we don’t mind locking up another home game or two. Not to mention these kids like to play in the cold weather.”

Edwardsburg outrushed the Bears 481-95. Hursh and Gaideski had 204 and 105 rushing yards respectively.

Conner Ostrander (10 tackles) and Bennet Meyers (7 tackles) led an Eddies’ defense that also had seven tackles for loss throughout the contest.