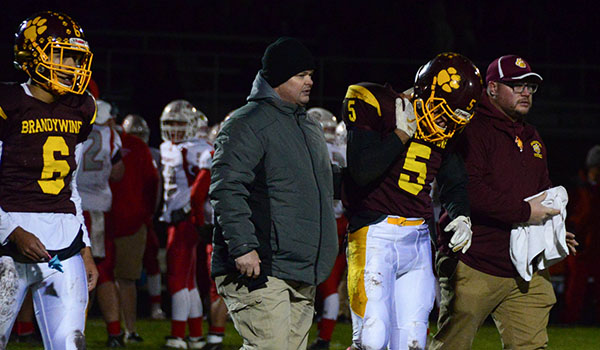 NILES — Brandywine’s hopes of winning its first-ever playoff game were crushed Friday night as Constantine dominated Selge Field in the opening round of the Division 6 MHSAA playoffs.

Tears of frustration were visible on player’s faces as the No. 2-ranked Bobcats watched the

Brandywine was unable to establish its usual stout rushing attack throughout the entirety of the ballgame, finishing with minor 14 yards on the ground.

Constantine finished the game 434 yards of total offense, with 332 of it coming in the first half alone. The Falcons scored 20 points on six plays in the first seven minutes of the game.

Brandywine coach Mike Nate knew his Bobcats were in for a rough night early on.

“They came out ready to play from the start,” he said. “They beat us in every area of the game. We just didn’t have an answer tonight.”

The only Brandywine touchdown came just before halftime on a 20-yard pass from Gabe Gouin to senior Jaelen Briggs. Gouin had no choice but to rely on his passing game all night as Constantine’s defense shut down the Bobcats’ running game. Gouin, a junior, ended the game with 175 passing yards.

Senior Jordan Abrams saw his football season end with minus-five yards rushing and only eight carries. Abrams briefly sat out during the first quarter after an injury.

Shane Brown, another senior standout, was ejected from the game in the third for unsportsmanlike conduct. He ended with 23 yards receiving.

“We threw everything we had at them, but we got outplayed, outcoached,” Nate said. “We just got beat by a very good team.”

Despite the tough loss, Nate said he will not let the defeat ruin the season his team had.

“We will keep our heads up,” he said. “We lose 13 seniors who helped rebuild this program. They should be proud to end their senior year with a 9-1 record. That’s what I want them to remember.”

The Falcons led 20-0 after the first quarter, 44-8 at halftime and 51-8 heading into the fourth quarter.

Constantine (8-2) advances to the Division 6 district championship game to face Hilldale (10-0). No game time has been announced.