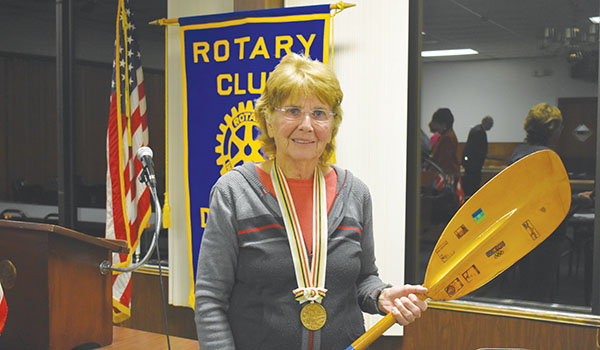 DOWAGIAC — The Dowagiac Rotary Club is looking to expand its connections with local students.

Last Thursday, the Dowagiac Rotary Club hosted an Interact Parent Appreciation Night to serve as an opportunity for Rotarians to meet members of Dowagiac Union High School’s new Interact club. The club, led by Melissa Stanger, is still in its beginning stages and recently hosted its first meeting.

Also at the event, was guest speaker and three-time Olympic competitor Marcia Smoke, who talked about her life and Olympic accomplishments.

Rotarian Matthew Cripe, the organizer of the IPA night, previously had a conversation with Smoke about her kayaking in Florida. Cripe assumed the kayaking had been a leisurely activity. Smoke set the record straight and said she had been competitively kayaking.

“To me it’s always amazing how you meet fascinating people totally by chance,” Cripe said.

After hearing Smoke’s details of her life and competition, Cripe said he was inspired by Smoke, who currently lives in Buchanan, and felt she could encourage young people to accomplish whatever they set their minds to.

At the meeting, Smoke was joined by her longtime best friend, Patti Coyer, who she met through the sport.

Kayaking was not initially the sport Smoke wanted to compete in at the Olympics. Growing up in Oklahoma, Smoke and her older sister, Sperry, entered the competitive world of Amateur Athletic Union swimming first.

In the summer of 1960, Smoke found herself at the Rome Olympics, but only as a spectator after failing to qualify twice for the Olympics. She had tickets to the canoeing or sprint kayaking competitions. While watching the games, Smoke saw the U.S. women kayakers come in last.

“I thought to myself, ‘wait a minute. Maybe this is my sport,’” Smoke said.

In Niles, a man had started a business selling wooden Danish flatwater racing kayaks. Smoke’s mother called the man and told him she had two girls that wanted to go to the Olympics.

The owner, Sperry, Smoke and the owner’s daughter, went out in a four-person kayak on Diamond Lake. Smoke recalled getting halfway across the lake and wanting to die and quit.

However, $250 later, Smoke bought her first kayak, spent the summer of 1961 practicing on the Huron River and working on her balance.

By 1964, Smoke was good enough to make her first Olympic team and traveled to Tokyo. Showing up six weeks before the competition, Smoke said the managers were not interested in the coach working with the U.S. kayaking team because they figured the women would not compete well.

“They figured these girls aren’t going to do any good,” Smoke said.

A Hungarian man, who was a coach from Italy after defecting from Hungary, took the team under his wing and trained them.

Smoke ended up winning a bronze medal in the one-person kayak 500-meter race. Two U.S. women won a silver medal in the double kayak race. Sperry went on to reach her Olympic dreams in 1968.

After 1973, Smoke retired from competitive racing and started the Niles/Buchanan Kayak Club. She went on to coach several future Olympians, including her own son, Jeff Smoke, who competed in the 2004 Olympic games in Athens.

“[Smoke] just dances through life,” Cripe said after she concluded her program.

NILES — Installations and work meant to update and upkeep the Niles community as a whole were unanimously approved by a... read more