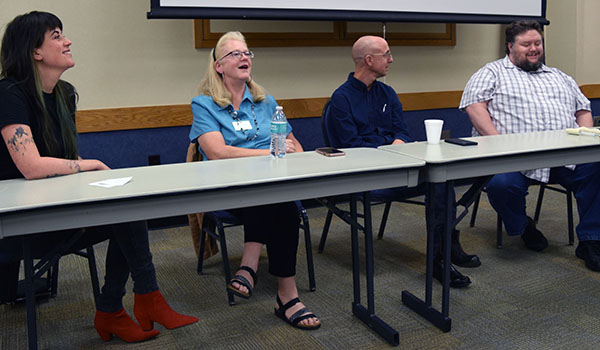 To help with his students’ research, Schauer devised a unique apparatus for purifying water in his laboratory.

“Creativity is important in every field, not just artists, writers and poets,” he said. “Creativity is the key to success in life, allowing you to find solutions to problems by creating tools. If all you do is use stuff right in front of you and follow procedures given to you, that makes you a technician. Great things come from creativity. I’m one of the people who has to work harder at it. Don’t give up if you don’t consider yourself artistic.”

Schauer carves woods with “sentimental value,” such as an aspen stick friends brought from Wyoming he whittled into a “pioneer man” as a souvenir of their trip. He creates in a basement workshop bristling with sharp tools.

“The tools themselves are a big part of the enjoyment,” he said. “I have chisels 250 years old. Of all the hobbies I’ve tried throughout my life, this stuck.”

“Creativity is kind of in my job description,” Eakins said, “but it’s not surprising Doug’s on the panel because the creative process is the process of inquiry, which is very scientific.”

Eakins starts with a vision.

“What comes next is sharing. Reaching out can lead to innovation. People see what you did and are inspired — or it can fall flat, which happens a lot. Evaluation is the most important part because that’s where improvement happens. I’m a rule-follower in my normal behavior. Being creative is where I can be a little ornery and mess with things.”

Eakins — whose artistry spans ceramics, glassblowing and welding — brought a “gratuitously-creative” Japanese-style raccoon puppet that flopped because it did not do whatshe wanted. In Bunraku, each puppet takes three people to operate: one for the legs, one for the left arm, with the main puppeteer operating the body, right arm and head, including a facial-expressions toggle control.

The puppet processed emotions from her 2013 move from Las Vegas to southwest Michigan. Rural roadkill made her ponder her own mortality.

“All the people in my world were going by in cars at 65 mph. I was lonely. How do I reach them? By waving! It helped me realize what I was feeling,” Eakins said.

“Like Shannon, it always starts with a vision in my head,” Shirey said, “or I’ll see something I think I can do better. I used to make ornamental things, but gravitated to purses, backpacks, totes and dumpling pouches.

“I like vintage items, so I get inspiration from thrift stores and yard sales,” Shirey said. “I like repurposing things. I call the process my happy place. It demands my total attention, shutting off outside problems for a time. I like patterns but every now and then like to go rogue and modify a pattern with a new twist. I also like surprises, so you might open something and find a different-colored zipper accent.

“Nothing makes me happier than discovering a new tool that makes it easier,” Shirey continued. “Most recent is a bodkin — tweezers with claws on the end. Creativity comes in all forms. It brings me joy, happiness and contentment. I admire people who can do something I can’t. [Carving] a piece of wood revealing itself, though, would be my idea of torture!”

Dombrosky pauses his art during the school year so teaching is his exclusive creative outlet. Before bringing his drawing class to “preserve the forum for posterity,” he lectured on Marilyn Church, author of The Art of Justice. The celebrated New York Times courtroom artist is also an abstract painter. Her drawings have been collected by both the Smithsonian Institute and the Library of Congress, which has archived 4,500 of them.

Unlike Schauer and Shirey, Dombrosky avoids using a studio, as it helps him to be open to the creative process. He has explored ephemera since 2003, collecting drawings and handwritten notes on scraps of paper, sheet music, even paper plates, then embroidering the text. He said it is like writing a “very slow book.”

DOWAGIAC — Southwestern Michigan College’s website, swmich.edu, will be undergoing a redesign with a predicted completion date of next summer,... read more